SEOUL, Jan. 13 (Yonhap) -- Kia Motors Corp., South Korea's No. 2 carmaker, said Sunday that it has partnered with the megahit online game "League of Legends" (LoL) to support a tournament in Europe.

The carmaker, part of Hyundai Motor Group, said on its social networking service account that it signed a sponsorship pact with Riot Games, which produced and markets LoL. It will be the sole automobile sponsor for the European league championship.

The multiplayer online battle arena game has some 150 million users logging on every month and is one of the most popular e-games in the world at present. Its 14 leagues, which are run every year, attract huge numbers of players and viewers, and generate considerable publicity.

Kia, in particular, said the European league drew in some 81 million viewers in the 2018 season.

Under the official partner contract, the South Korean carmaker can display its corporate logo, secure tickets that can allow people to watch the game live and set up its own booth at the championship game.

"The LoL agreement is a good opportunity for Kia to get young people to become better aware of the Kia brand and better communicate with the company," a corporate representative said. 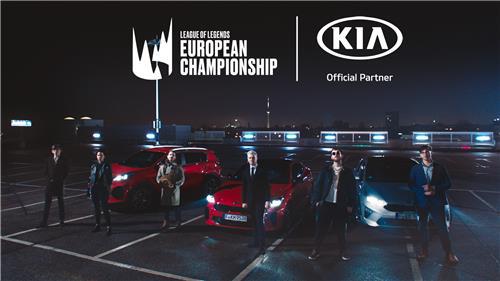