The business survey index (BSI) for the first three months of the year based on data collected from 560 manufacturers showed an overall market forecast of 83, with corresponding numbers for sales standing at 85, the Korea Institute for Industrial Economics and Trade (KIET) said. 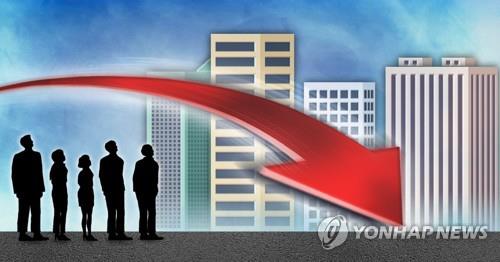 A BSI of less than 100 means pessimists outnumber optimists.

The numbers represent a nine- and 10-point drop compared with the previous three-month period, with the index for the domestic market and exports both falling to 84 and 93, respectively.

The index figure for facility investment was down to 95, while those for labor remained unchanged at 95.

KIET said among key industries, semiconductors that had propped up the country's manufacturing field in the past, stood at 90 for the January-March period, with figures for autos, shipbuilding, steel and metal all heading south. On the positive side, numbers for electronics and textiles moved up.

Semiconductors, in particular, nose-dived 21 points from the previous quarter with double-digit losses expected for cars and steel.

For the whole of the new year, the BSI reading stood at 91, down from 101 for 2018, with electronics and precision equipment standing over the 100 mark, with others expected to struggle going forward. The annual number for semiconductors stood at 83, even below 84 for autos and 90 for steel.
(END)