SEOUL, Jan. 14 (Yonhap) -- The global semiconductor industry is expected to expand 2.6 percent on-year in 2018 on steady demand, despite an end to a super boom in the memory chip segment, a report showed Monday.

According to the recent report from market researcher Gartner, sales of the world chip industry are projected to reach US$489 billion this year, compared with $477 billion last year.

The projection is widely seen as "upbeat," though it is sharply lower than the double-digit growth rates for the previous two years.

The global chip sector posted a stellar 21.6 percent on-year growth rate in 2017, with the figure slowing to 13.4 percent last year.

Gartner painted a rosier outlook for next year, saying the world chip sector may enter into an upturn by growing 8.1 percent on-year to $528 billion. 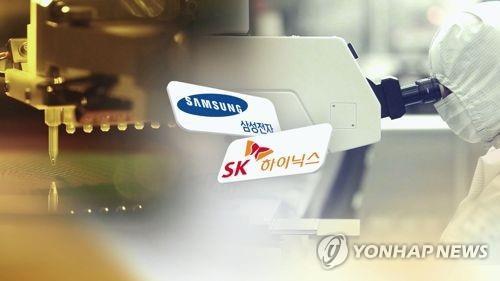 VLSI Research, another market tracker, forecast the chip industry's sales to drop 1 percent this year from last year's all-time record before switching to a 7 percent on-year increase in 2020.

Linx Consulting said the growth rate of the world semiconductor industry will recover to 6.9 percent in 2022.

Market watchers, meanwhile, said Samsung Electronics Co., the world's top memory chip maker, is expected to remain in the black in its semiconductor business, despite an earnings shock for the fourth quarter of last year.

The fourth-quarter operating profit of Samsung's chip division fell to the 10 trillion-won ($8.7 billion) mark for the first time since the third quarter of 2017, but Samsung will likely chalk up an operating income of up to 30 trillion won in the segment, they added.

But a local brokerage house said conditions for the DRAM market will highly likely worsen this year due to industrywide competition amid a supply glut, hurting profits of Samsung and SK hynix Inc., another South Korean chip giant.

"DRAM prices may fall more than expected as demand is expected to rise in the upper 10 percent range this year, compared with a near 20 percent surge in supply," Meritz Securities Co. said.

Samsung Electronics' operating profit is thus projected to sink 43.3 percent on-year to 33.4 trillion won this year, with the figure for SK likely to nose-dive 53.5 percent to 9.9 trillion won.
(END)