SEOUL, Jan, 14 (Yonhap) -- South Korean religious circles are busy making preparations to mark the upcoming centennial of the March 1, 1919, independence movement against the brutal Japanese colonial rule of the Korean Peninsula in the early 20th century.

Religious people spearheaded the independence movement a century ago.

In fact, all 33 national representatives who jointly announced the March 1 Declaration of Independence, were religious men -- 16 Christians, 15 Cheondoists and two Buddhists. The declaration touched off nationwide struggles for independence.

The Korean Conference of Religions for Peace (KCRP), an association of the country's seven largest religious groups, will host a seminar on past independence movements around the world at Sejong Center for the Performing Arts in Seoul on Feb. 18. Participants will then visit historic sites related to the nonviolent uprising, including Tapgol Park, where the independence declaration was announced, and Seodaemun Prison, where thousands of Korean independence fighters were imprisoned and harshly tortured during Japanese colonial rule (1910-45). 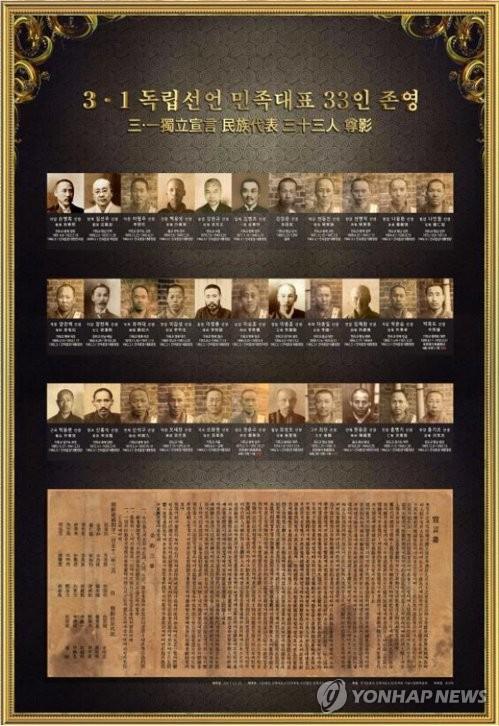 The following day, the KCRP will hold an international peace prayer to honor the movement at the border station of Dorasan in Paju, north of Seoul, with local religious leaders and 70 foreign religious dignitaries and historians to attend the service.

By religion, the United Christian Churches of Korea (UCCK) and the National Council of Churches in Korea (NCCK) are planning to hold a joint prayer on March 1.

The NCCK plans to announce a Korean Christian charter titled "Korean Christians' Confessions and Resolutions on the occasion of the Centennial Of the March 1 Movement."

The NCCK, in particular, plans to launch a youth school in September, where students will study the independence movement and the country's modern history.

The UCCK is also considering a joint prayer on Feb. 24, a symposium on Feb. 25 and a church festival at Seoul Square and a national rally at Gwangwhamun Square in downtown Seoul on March 1.

Buddhist and Cheondoist orders are also planning seminars, exhibitions and services to mark the centennial of the movement.
(END)