SEOUL, Jan. 14 (Yonhap) -- KT Corp. and Kakao Corp. are set to begin work to raise their stakes in their own Internet-only banks -- K-Bank and Kakao Bank -- as a law that eases the ownership rule for web-only banks will go into effect later this week, but their plans to raise stakes still need regulatory approval, officials said Monday.

The law, which comes into force Thursday, allows information technology firms to hold as much as a 34 percent stake in an Internet-only bank.

K-Bank and Kakao Bank led by KT and Kakao, respectively, were launched in 2017. They have challenged traditional banks in South Korea and forced them to cut commission fees and revamp their online and mobile banking services.

However, the law prohibits a shareholder of an Internet-only bank from raising a stake in the bank if the shareholder was punished for violating an antitrust law. 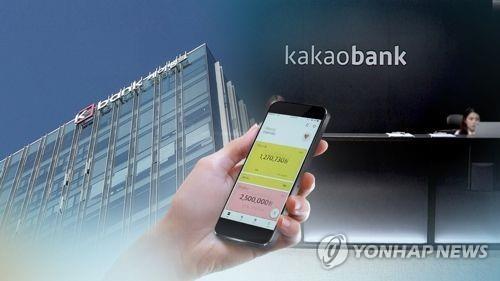 KT and an affiliate of Kakao violated the anti-trust law in the past, raising questions about whether financial authorities could give a nod to them to increase their stakes in K-Bank and Kakao Bank.

Separately, the Financial Services Commission (FSC) has said it could give preliminary approval to two Internet-only banks in May but hinted that only one group might receive approval.

E-commerce firm Interpark Corp. has said it will apply for a license to establish an Internet-only bank.

Naver Corp., the nation's dominant Internet portal, has said it was considering various options about a web-only bank, but it has not explicitly said whether it would set up an Internet-only bank.
(END)