The index opened lower and had extended losses on heavy selling by institutions that offloaded local shares worth 178.8 billion won.

But retail and offshore investors picked up shares worth 42.5 billion won and 95.6 billion won, respectively, limiting a further drop.

"Fears have risen over potential impacts of the ongoing shutdown of the U.S. government not only on the American but on the global economy as well," said Seo Sang-young, an expert at Kiwoom Securities.

The U.S. has closed part of its federal agencies since Dec. 21 (Washington time), marking the longest-ever shutdown in its history.

According to an estimate by S&P Global Ratings, the U.S. economy had lost US$3.6 billion by last Friday due to the temporary halt.

"Amid uncertainties over Britain's vote on its possible withdrawal from the European Union, investors also got disappointing data on China's exports," he added.

Most big-cap shares on the Seoul bourse lost ground, with tech firms leading the fall.

The local currency closed at 1,123.0 won against the U.S. dollar, down 6.6 won from the previous session's close. 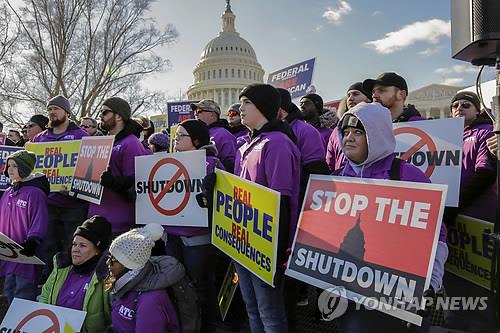