Only 26.3 percent of the respondents supported such trips, according to the poll, which has a margin of error of plus or minus 4.4 percentage points and a confidence level of 95 percent. 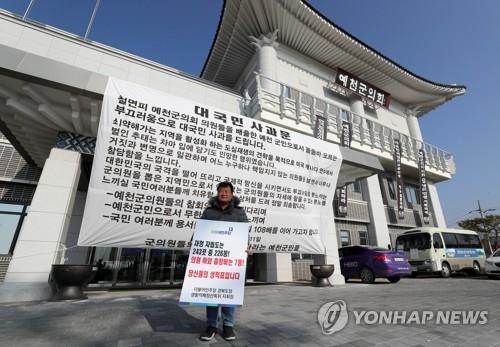 The negative public attitude appeared to have been influenced by recent misconduct by some members of Yecheon County Council in North Gyeongsang Province during an overseas trip.

A group of nine Yechon councilors and five staffers used taxpayer money to make a 10-day trip to the United States and Canada last month, which mostly included visits to popular tourist spots such as Niagara Falls, though they claimed their travels were aimed at learning about the administrative practices of those countries.

Much to the disappointment of residents, however, a Yecheon councilor assaulted a tour guide in Canada, allegedly while intoxicated. Other council members were also accused of inappropriate behavior, such as asking the guide to take them to a hostess bar.

The minor opposition Justice Party recently issued a statement calling for the abolition of all business trips by members of local government councils.

Faced with mounting public criticism, meanwhile, councilors in other local governments have canceled or halted their overseas trips.

Four members of Incheon's Gyeyang-gu Council, together with two staffers, departed for Australia and New Zealand on Thursday for visits to the Blue Mountains, Sydney Opera House, Waitomo Caves and other popular destinations but abruptly suspended their travels and returned home two days later.

In response to public criticism, the Ministry of the Interior and Safety has said it will strengthen its oversight of local councilors' overseas business trips.