SEOUL, Jan. 15 (Yonhap) -- The global smartphone market is expected to contract further in 2019 due to weaker demand and other unfavorable factors, a report said Tuesday.

Global smartphone production is expected to reach 1.41 billion units this year, down 3.3 percent from the previous year, according to the report from TrendForce.

Replacement demand is likely to slacken this year due to a lack of devices with landmark functions, TrendForce said, adding global smartphone output could drop as much as 5 percent on-year due to the uncertainty and fallout from the ongoing trade war between the United States and China.

Samsung Electronics Co. is projected to grab the leading market share of 20 percent this year, followed by Huawei with 16 percent and Apple Inc. with 13 percent.

Among the top three industry players, Huawei will likely become the only company to post positive growth in smartphone production. 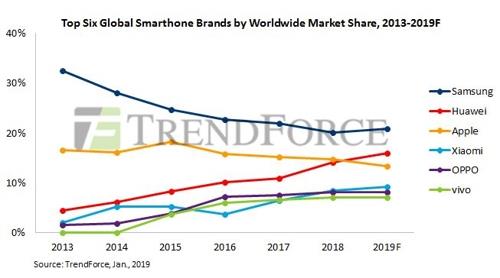 Earlier, another industry tracker Strategy Analytics predicted global smartphone shipments to come to 1.43 billion this year, down 0.6 percent from a year earlier.

TrendForce said Samsung will likely take a more aggressive strategy in terms of price and specifications as the company finds it hard to tap new business areas.

Samsung plans to roll out its Galaxy M mid-range and low-end smartphones in India at the end of this month and unveil its Galaxy S10 flagship smartphone and foldable smartphone in San Francisco next month in a bid to create new demand and further outperform Chinese rivals.
(END)