According to the data provided by Eugine Investment & Securities, Doosan Infracore, South Korea's No. 1 construction equipment maker, sold a total of 15,630 excavators in China last year, up 44 percent from a year earlier.

"Higher demand from massive infrastructure projects, along with increased replacement of aged excavators, helped jack up sales there," a Doosan Infracore official said.

China's excavator market has been growing sharply thanks to the country's ongoing railroad, highway and airport projects in lower-tier cities, as well as continued urbanization.

In particular, China's massive "One Belt, One Road" infrastructure drive aimed at increasing its economic clout in Asia is stimulating demand for excavators.

The country accounts for roughly a third of the world's construction equipment market.

"Demand for excavators in China may be better this year than previously anticipated, as last month's sales beat our expectations," Lee Sang-woo, an analyst at Eugine Investment, said.

The analyst expects the sales of excavators in China to reach some 175,000 units this year, down 5.1 percent from last year. 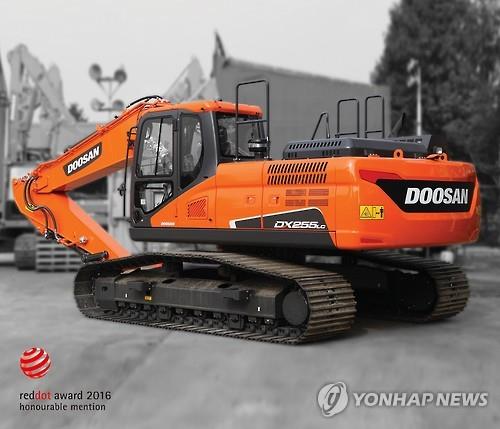