SEOUL, Jan. 16 (Yonhap) -- South Korea's biggest Buddhist sect, the Jogye Order, said Wednesday it will push for a number of joint projects with the North Korean Buddhist community this year, including a stay-over meditation program at Mount Kumgang in the North.

"(We) will push for discussion with related (North Korean) bodies in order that we can arrange for a temple stay (program) in the Singye Temple on Mount Kumgang," he said.

The program, if agreed, would require the dispatch of South Korean monks and the building of accommodation facilities, he said, indicating that the Jogye Order will address the issues internally before opening discussions with the North.

Singye Temple, one of the four best-known temples on Mount Kumgang -- the others being Pyohun Temple, Jangan Temple and Yujom Temple -- was ravaged and demolished during the 1950-53 Korean War and rebuilt in cooperation with the South Korean Buddhist community in 2007.

The joint temple stay program will still be pursued within the limit of any international sanctions on North Korea, and once the initial deal is completed the Jogye Order will expand it to other major temples across the North, according to the order.

The Buddhist sect considers the plan to be a positive step in cementing inter-Korean peace by attracting South Korean and foreign tourists to the country.

Discussions with the North could begin in a religious New Year ceremony the sect is set to host with the North's Korea Buddhist Federation on Kumgang next month, according to the order.

"(Jogye) will also discuss ways to hold a celebratory lantern lighting ceremony in temples across Pyongyang on this year's Buddha's birthday, as well as an exhibition of traditional lanterns from both South and North Korea," Ven. Wonhaeng said.

The sect is planning to hold joint inter-Korean festivals by inviting North Korean Buddhist officials to the South on the day of Buddha's birth, he said.

The envisioned joint projects also include a program to plant trees around North Korean Buddhist temples.

The new chief said he will execute a range of measures to reform the Jogye Order's election process this year, after his predecessor, Ven. Seoljeong, stepped down amid corruption scandals, triggering a major division in the sect's followers. 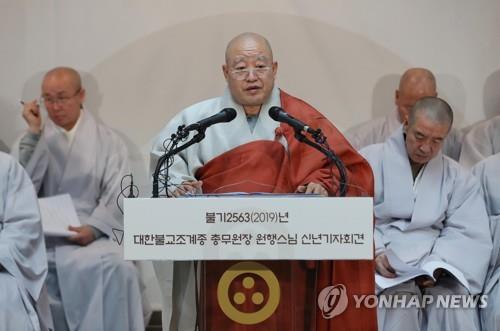