SEOUL, Jan. 21 (Yonhap) -- Acclaimed K-pop boy band Seventeen returned Monday with the new EP "You Made My Dawn," fronted by "Home," which brings out the 13 members' warmer and manly sides.

The teenage concept band showed up in uncharacteristic warm pink suits and tailored jackets as the members presented "Home," the title track of the six-track EP, at a press showcase for the album in Seoul.

"Home," the second track of the album, is an "urban future R&B" song with synth sounds, telling of the warmth of home.

"As the members discuss the production of each album, we always cling to the message that we can deliver to the public. For this album, we had the idea that we wanted to come up with a consoling song, a song that could comfort the public and the Carat," member Woozi said in the showcase, referring to the group's global fandom called "Carat."

Woozi composed and wrote the title song, in cooperation with member Bumzu.

"That's how we came up with this keyword 'home' where you can rest comfortably. I hope (the public) will savor this song as a genuine work, not just as a commonplace idol song," he said. 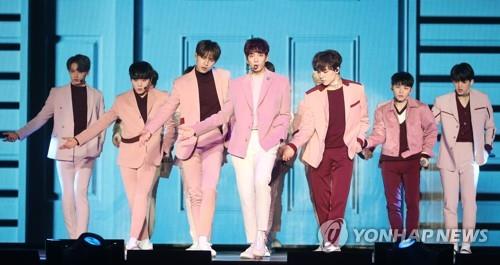 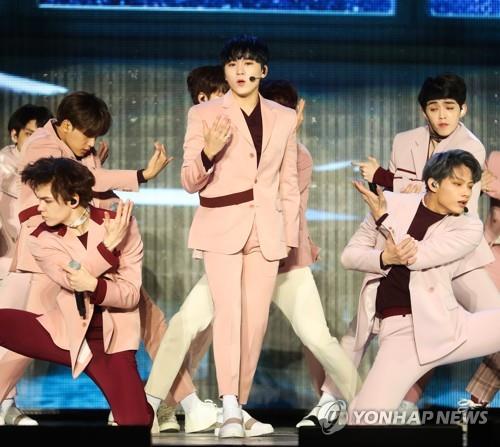 "It usually does take a lot of time when we do the first dance of a new choreography because we naturally gain teamwork after spending so much time together," Seventeen said. "But the triple turn took us an unusually long time to master."

"Home" is one of the EP's three tracks that bring together all 13 members. The others are the first track "Good to Me," a hip, sexy number also composed by Woozi and Bumzu, and the final track "Getting Closer," whose Korean name is "Out of Breath."

"Getting Closer," which comes with breathtaking, lung-busting choreography, was premiered during the 2018 Mnet Asian Music Awards, where the group was awarded Best Dance Performance Male Group.

The remaining three tracks are by Seventeen's three sub-units each focused on vocal, hip-hop and performance.

The third track "Hug" was recorded by the vocal group which included Woozi, while the fourth and fifth tracks -- "Chilli" and "Shhh" -- are by the hip-hop and the performance groups, respectively.

"The keywords like warmth and consolation run through all the tracks," member Dino said, adding that the group put its fate on the success of the latest record.

"This year, we will aim as high as taking the top prize at annual year-end music awards events," member Seungkwan noted.

Member Mingyu said the members remain open to the possibility of officially releasing separate albums for the sub-units, although there are no set plans due to time limits.

"We will of course be working hard as a team, but we are also open about the possibility of separate activities in the units," he said, adding that the wish has, however, not materialized.

"As Seventeen shines the most when we are together as a team, we tend to focus on it, but the door is always open," Woozi also noted.

In April, the boy band is scheduled to throw a concert in Japan, where the group has cemented solid popularity. Including Japan, the band wishes to go on a world tour this year.

"We have been talking with our management agency since early this year. We may go visit Carats through a world tour as we want to repay their love and support. We haven't gone to Europe yet, but we want to visit there too since we heard there are Carats there too," Seventeen said. 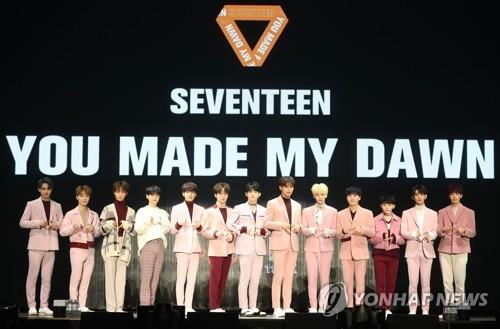