Cho, the team's closer, and Park, its catcher, were accused of sexually assaulting an intoxicated woman at a team hotel in Incheon, 40 kilometers of Seoul, last May, when the Heroes were in town for a road series against the SK Wyverns.

Prosecutors said they looked into closed-circuit television footage from the hotel and ran a lie detector test during their investigation. They added they couldn't disclose further details out of respect for the privacy of the parties involved.

Cho and Park, who were indefinitely suspended by the KBO last May, had denied the charges. Cho said he had consensual relations with the woman, and Park claimed he'd returned to his room in the hotel after the three had drinks together.

Cho and Park in turn filed a complaint against the woman for making false accusations, but prosecutors said they will also not indict her on that count.

With both players having avoided indictment, the KBO said it will hold a disciplinary hearing in the coming days to discuss lifting its lifetime ban on them.

Cho and Park could still face some sort of suspension, and should the KBO decide to apply the penalties retroactively, they could be back in the lineup during the first half of the 2019 season.

The KBO said it will have to review a formal report on the players' status to be filed by the Heroes before scheduling its disciplinary committee meeting.

Both had been key contributors for the Heroes, with Cho, a 24-year-old fireballer, in particular having emerged as a solid bullpen arm.

Before the allegations surfaced, Cho was 1-2 with nine saves and a 3.79 ERA in 18 appearances in his first season as the Heroes' closer. 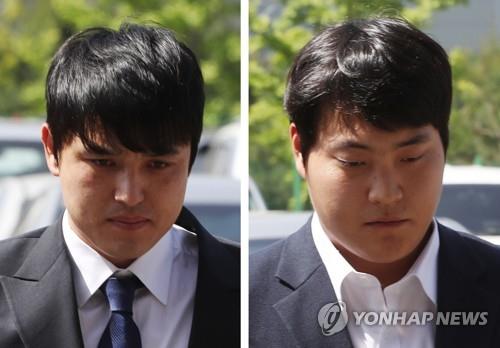