SEOUL, Jan. 28 (Yonhap) -- Some 500,000 people will create a "human chain" along the 500-kilometer Demilitarized Zone bisecting South and North Korea in April to mark the first anniversary of an inter-Korean summit deal, a civic organization said Monday.

During the summit on April 27 last year at the truce village of Panmunjom, South Korean President Moon Jae-in and North Korean leader Kim Jong-un agreed to halt "all hostile acts" against each other, explore ways to enhance cross-border exchanges and pursue the complete denuclearization of the Korean Peninsula.

"The purely civic campaign will take place April 27," an official at the DMZ Peace Chain (DPC) said during a news conference at the Press Center in Seoul.

Participants will be collected by mid-February via committees to be set up by the DPC in cities and counties across the nation, the official said.

"500,000 people is not a small number, but we'll be able to collect them as we've prepared for this event for a long time," the official said.

The event also aims to mark the centennial of the March 1 Independence Movement, a nationwide march staged in 1919 to call for Korea's liberation from the brutal Japanese colonial rule. Korea regained its independence at the end of World War II in 1945. 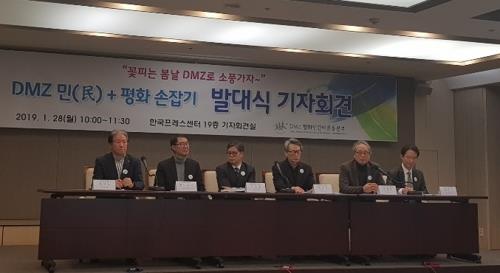 'Human chain' to be formed along DMZ

'Human chain' to be formed along DMZ