SEOUL, Jan. 28 (Yonhap) -- A study by a South Korean government agency has again confirmed that China is largely responsible for fine dust particles over the Korean Peninsula, officials said Monday.

The latest conclusion was reached by the National Information Resources Service (NIRS), an affiliate of the Ministry of the Interior and Safety, which analyzed fine dust flows over the area of Incheon, west of Seoul, from January 2015 to March 2018, the officials said. 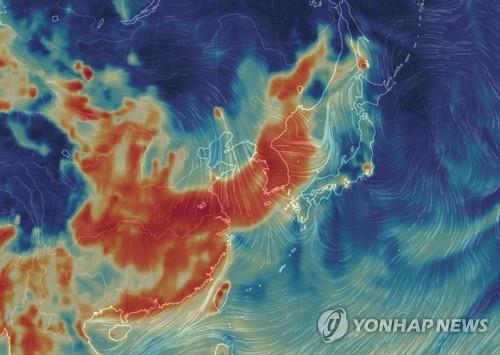 NIRS researchers found that the density of fine dust over Incheon increased in proportion to that of China and when wind blew from the west. They also said external factors were more influential than domestic ones in the formation of fine dust in the city.

When Incheon's fine dust particles reached "not safe" levels, wind blew from the west and the concentration of aerosols, or fine particles in solid or liquid state floating in the air, was very high in Beijing, Shandong Province, Shaanxi Province and Hebei Province, the researchers said.

Data collected from 20 fine dust observatories in Incheon, including those on Yellow Sea islands, have also proven the high proportion of external factors in the area's fine dust pollution, they explained.

The agency said data from the Ministry of Environment; satellites of the National Aeronautics and Space Administration (NASA) of the United States; and Aeronet, an international aerosol observation network run by NASA, were utilized to develop its fine dust forecasting model.

The agency said it will further heighten the forecasting accuracy by additionally securing data from South Korea's Chollian-2A and 2B satellites.

Recently, Seoul Mayor Park Won-soon rebutted the Chinese government's allegation that China has nothing to do with hazardous fine dust over the Korean Peninsula.

Park said that he has research papers from municipal and state labs that conclude around 50 to 60 percent of fine dust over South Korea is from China.