INCHEON, Jan. 31 (Yonhap) -- Doosan Bears outfielder Kim Jae-hwan may have won the MVP in South Korean baseball last year, but as far as he's concerned, that's already well in the past.

"I don't think I need to put any pressure on myself just because of what I did last season," Kim told reporters at Incheon International Airport on Thursday, before his Korea Baseball Organization (KBO) club departed for Okinawa, Japan, to begin their spring training.

"We're about to start a new season, and I'll work hard and try to put together another strong year," Kim added.

It's going to be hard for Kim, or anyone else for that matter, to match what he did in 2018. The late-blooming 30-year-old set career highs with 44 home runs and 133 RBIs, leading the KBO in both categories. He also scored 104 runs to become the first KBO player to record at least 30 home runs, 100 RBIs and 100 runs scored in three consecutive seasons. 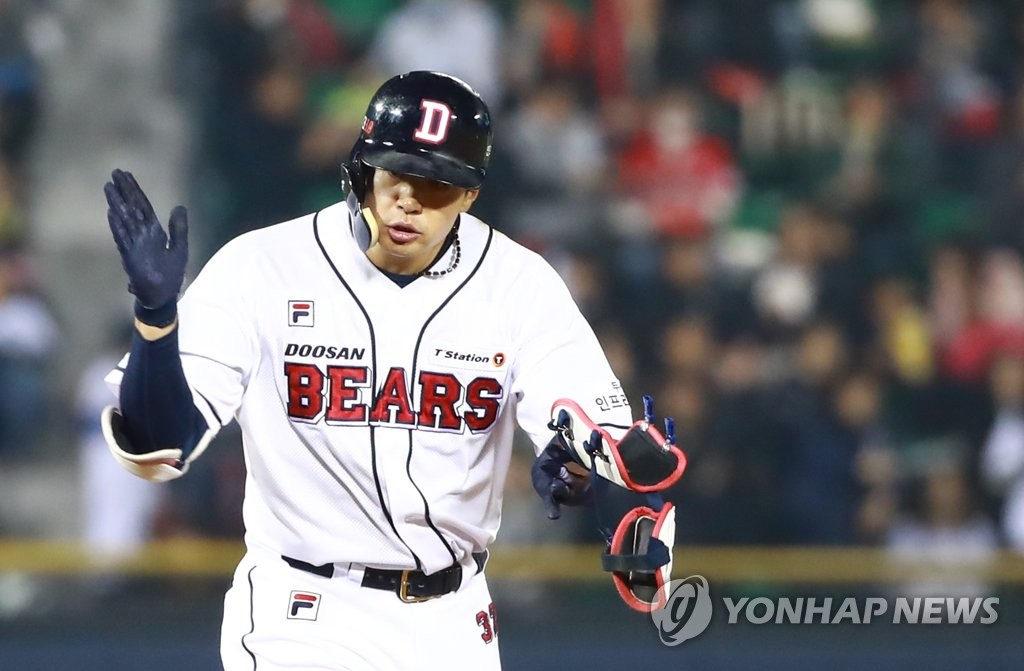 Kim won his first regular season MVP award and also picked up a Golden Glove, awarded to best overall players at each position.

For all his regular season excellence, Kim had a postseason he'd rather forget. The Bears, after finishing with the best regular season record, advanced directly to the Korean Series. But during batting practice before Game 3 against the SK Wyverns, Kim pulled his oblique muscle and missed the rest of the championship series. The Bears bowed out in six games.

"I still feel terrible about the injury," Kim said. "I'd never been hurt in that area before, so I am still being careful. I feel fine now, and I should continue to get better. Hopefully, by the end of spring training, I'll feel more confident about my physical condition."

Kim, who made 470 million won (US$422,490) last year, got a hefty raise to 730 million won for 2019. And he'll have to earn every penny of that, especially since the departure of All-Star catcher Yang Eui-ji via free agency will leave a major hole in the Bears' lineup.

Last year, Yang, considered the KBO's best two-way backstop, batted .358 with 23 home runs and 29 doubles, all of them new personal highs. The Bears will be hard pressed to replace that kind of production, but Kim said the club will be just fine.

"I still can't believe he's gone, but we have a new foreign hitter (Jose Miguel Fernandez) and other guys will be ready to pick up the slack," Kim said. "I don't think the void will be as big as our fans fear."