According to the Korean Film Council data, "Extreme Job" recorded 10,004,087 for its cumulative tally of views at about 12:25 p.m. The film recorded a total audience of 9.39 million on Tuesday.

With this accomplishment, "Extreme Job" became the 23rd film to hit the milestone in South Korea, following local fantasy film "Along With the Gods: The Last 49 Days" that surpassed the 10-million mark last August. "Extreme Job" is also the 18th South Korean move and only the second comedy film, after "Miracle in Cell No. 7."

The film, directed by Lee Byoung-heon, is also the third-fastest film to hit the 10-million milestone in South Korea, behind "The Admiral: Roaring Currents" and "Along With the Gods: The Last 49 Days."

The film, which premiered on Jan. 23, has yet to give up the top spot on the weekend box office chart. It passed the five-million mark just 10 days after its premiere and has been attracting daily average attendance of one million since Saturday, the start of the Lunar New Year's Day holidays. 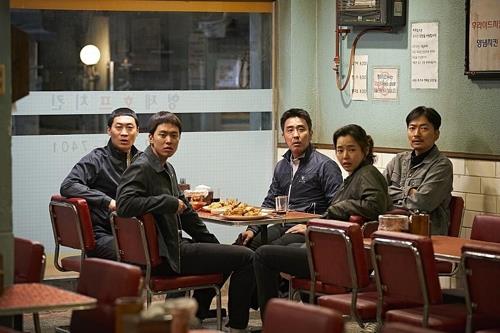