"As you all may know, the government is looking to find a new growth engine in innovative growth as it seeks to build an innovative, inclusive nation," the president said in a meeting with the heads of top venture firms and unicorn companies. 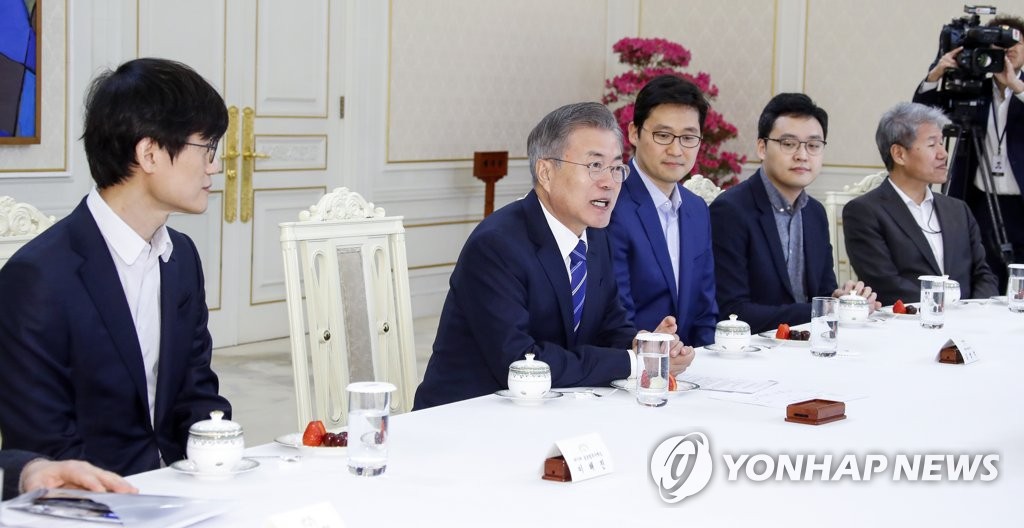 "To this end, we especially need new innovative companies, together with various innovations, and we need to create an environment that encourages new startup businesses so such companies that come to life through such efforts can become unicorn companies and even large conglomerates," the president told the meeting.

The meeting held at the presidential office Cheong Wa Dae was attended by the heads of three so-called first generation venture firms, which include the country's top online portal operator, Naver, and four unicorn companies that include e-commerce giant Coupang.

"It will be a chance for in-depth discussions on ways to foster venture firms," a Cheong Wa Dae official earlier said of the meeting.

Moon has been holding a series of meetings with various economic players, ranging from the heads of top conglomerates to small shop owners, in which he asked for their support in creating jobs while explaining government measures aimed at revitalizing Asia's fourth-largest economy.

The Bank of Korea slashed its 2019 growth outlook for the local economy to 2.6 percent from the 2.7 percent forecast in October.

President Moon has repeatedly emphasized the importance of promoting and encouraging new startup businesses and venture firms as a way of creating jobs and boosting the local economy.