SEJONG, Feb. 7 (Yonhap) -- South Korea's finance minister said Thursday that he expects weak employment data in January due mainly to a high base effect amid an economic slowdown.

Hong Nam-ki, made the assessment at a meeting with heads of the National Tax Service, the Korea Customs Service, Statistics Korea and Public Procurement Service in Sejong, an administrative hub located 130 kilometers southeast of Seoul.

The South Korean economy added 334,000 jobs in January of last year from the same one month period of 2017, a high base effect that could likely lead to a disappointing jobs report in the first month of 2019.

In December, South Korea added 34,000 jobs from a year earlier.

Hong also called for preemptive and aggressive measures to cope with difficulties and risks, citing slowing exports, weak corporate investment and trade frictions between the United States and China.

Also on Thursday, the finance ministry said in a separate report that it may not be easy to bolster employment as the size of the economically active population aged between 15 and 64 is rapidly shrinking. 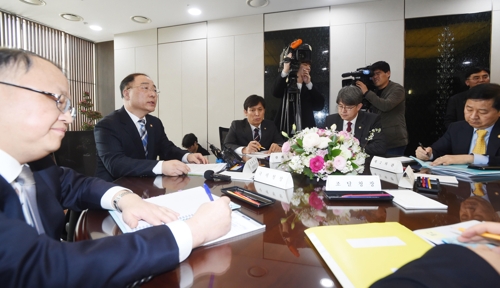