SEOUL, Feb. 7 (Yonhap) -- The U.S. envoy for North Korea is expected to fly back to South Korea on Friday to share the outcome of his Pyongyang visit, diplomatic sources have said.

Stephen Biegun has been in North Korea since Wednesday, following his arrival in the South at the weekend.

His mission is apparently to work out agenda and logistical details of a second summit between President Donald Trump and North Korean leader Kim Jong-un to take place in Vietnam from Feb. 27-28. Biegun's new North Korean dialogue partner is reportedly Kim Hyok-chol, former ambassador to Spain.

Biegun, who is leading an inter-agency delegation of around 20 officials, plans to return to South Korea on Friday, although his stay may be extended if additional discussions are needed, according to the sources. 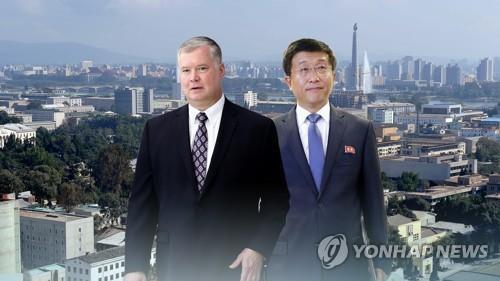 A South Korean foreign ministry official told reporters that Biegun has promised to provide the South Korean government with a quick briefing on the results of the working-level talks in Pyongyang.

Chances are high that he will meet again with Seoul's top nuclear envoy, Lee Do-hoon, on Friday or the weekend.

It's unconfirmed whether Kanasugi will have separate talks with Lee.

Biegun due back in Seoul on Friday: sources

Biegun due back in Seoul on Friday: sources