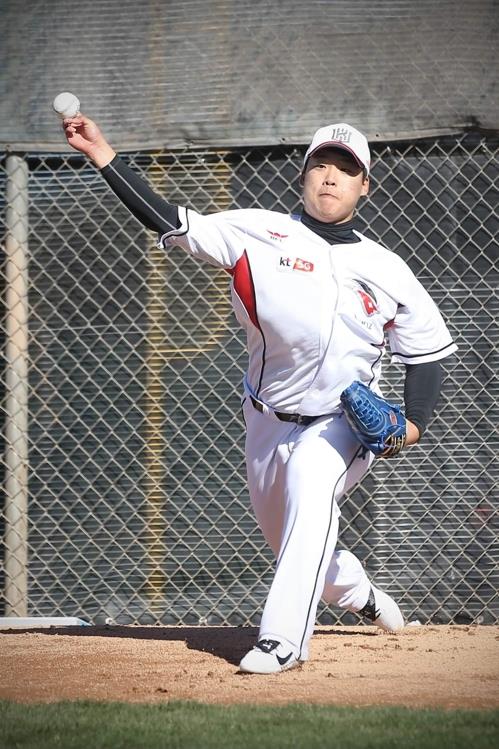 The Korea Baseball Organization (KBO) club said Kang threw about 20 pitches in the bullpen during spring training in Tucson, Arizona, on Thursday. The Wiz said manager Lee Kang-chul and his coaching staff decided pitching would present too much of a health risk for Kang and decided to shelve the idea.

Before the camp opened, Kang said he'd take some reps on the mound to see if it made sense for him to both pitch and hit in the KBO.

Kang excelled as a power pitcher and a slugging catcher in high school, but played exclusively in the outfield last year. The decision paid huge dividends, as Kang won the Rookie of the Year after leading all freshmen with 29 home runs and 84 RBIs in 138 games.

KT's new manager, Lee Kang-chul, said last month he'd consider putting Kang back on the mound. The 19-year-old player said he would only pitch as long as it didn't affect his health or adversely effect on his hitting.

Kang, who bats left and throws right, showed flashes of pitching brilliance during last year's All-Star Game, touching 150 kph (93.2 mph) while striking out both of the batters he faced in relief.

But Kang will stick to hitting for his sophomore season and beyond, though another surprise pitching appearance in an All-Star Game isn't out of question.