SEOUL, Feb. 8 (Yonhap) -- A statue symbolizing female independence activists who resisted Japan's colonial rule of Korea has been installed in the heart of Seoul in commemoration of the centennial of the February 8th Independence Declaration and the March 1, 1919, Independence Movement.

Jeongdong district was one of the venues for pro-independence demonstrations by Korean students during the March 1 independence movement. 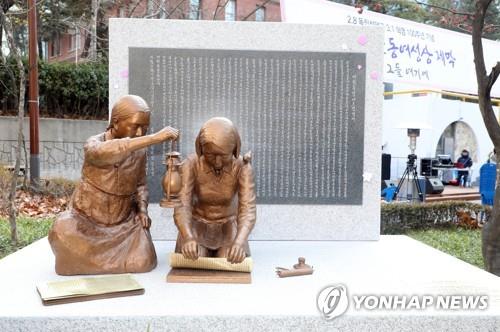 The statue, titled "On the eve of uprising," depicts one female student wearing traditional Korean attire shining a light as another female student, in school uniform, prints a declaration of independence.

The statue was produced by husband-and-wife sculptor team Kim Woon-sung and Kim Seo-kyung, who are also known for their previous work, the Statue of Peace, which symbolizes Korean victims of Japan's wartime sexual slavery.

Earlier in the day, ceremonies were held in Seoul and Tokyo to mark the centennial of the Feb. 8 declaration.

On Feb. 8, 1919, some 600 Korean students issued a declaration of Korean independence from colonial Japan at a rally held in the heart of Tokyo.