SUWON, Feb. 10 (Yonhap) -- Samsung Electronics Co. said Sunday it will release a full lineup of 8K QLED TVs with upscale features for the global market to expand its presence in the growing premium segment.

QLED TVs are LED TVs that use quantum dots to enhance performance in key picture quality areas. Samsung says its new lineup will have an image resolution four times more vivid than its 4K counterparts.

The South Korean tech giant began sales of its QLED 8K TVs in South Korea, the United States, Europe and Russia in late 2018 and plans to launch the premium lineup in 60 countries by March.

The firm said it will release QLED 8K TVs in six sizes ranging from the base 55 inches to 98 inches for the global market, offering a full range of viewing experiences for consumers. 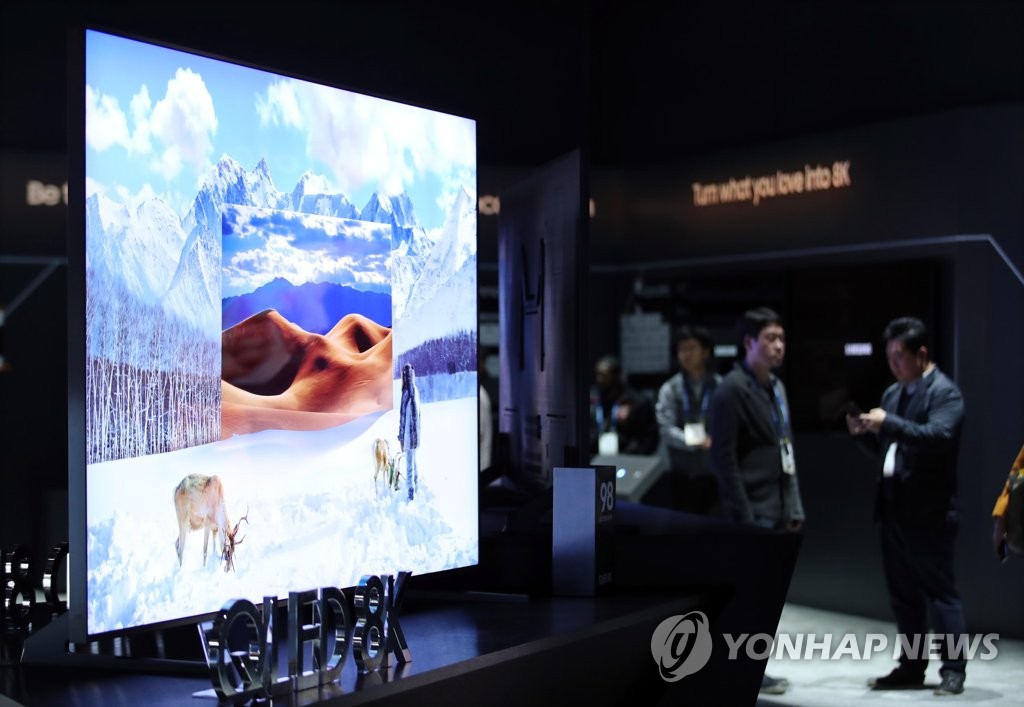 Addressing concerns over the lack of available 8K content for now, Samsung highlighted the artificial intelligence (AI) features enabled by "Quantum Processor 8K", which upscales lower-quality content to appear close to 8K resolution. It also automatically optimizes the sound for each scene.

"Display should come first followed by content. The opposite case never happens," Han Jong-hee, president of Samsung's visual display business, said in a meeting with reporters at the company's headquarters in Suwon, south of Seoul. "The 8K QLED TV presents the best image quality for any content. We are confident in its quality."

Han said commercialization of 5G networks will lead to a new era of technology innovation in high-quality content and games, expecting "explosive demand" for higher-resolution televisions down the road.

"Once 5G networks are commercialized in South Korea and the U.S., there will be more 4K and 8K videos as well as augmented and virtual reality content," Han said.

To grab a bigger chunk of the expanding premium segment, Samsung vowed to take a two-track strategy for its premium portfolio to cover both QLED and MicroLED TVs.

MicroLED displays consist of arrays of microscopic LEDs forming the individual pixel elements. Samsung says its new MicroLED TV tech offers the benefits of OLED without any compromises and allows users to customize its size and shape.

"For MicroLED TVs, we will first target the corporate sector and set the strategy for the mass market after looking into consumer reception and the ability to provide products at competitive prices," Han said. "If the market shifts toward large televisions faster than expected, it will drive up demand for MicroLED as well."

Samsung debuted its 146-inch "The Wall", the world's first modular MicroLED display, at the Consumer Electronics Show in 2018 and released a 75-inch version at this year's event.

The smaller screen has the same 4K resolution as the 146-inch version and requires advanced technology to reduce the pixels to a quarter the size.