According to the data compiled by industry tracker IHS Markit, China accounted for the largest share (31.9 percent) of the 152.16 million units of LCD televisions shipped during the first nine months of last year.

South Korea came in second at 30.6 percent, or 46.58 million LCD TVs, followed by Japan with 14.6 percent and European nations with 2.8 percent, the data showed.

It marked the first time for China to top the list, as South Korea had retained the top position for the past several years. In 2017, South Korea took up 32.4 percent of the world's total production, with China being a distant second with 27.2 percent.

It could just be "a matter of time" before China takes the leading position in the global TV market to pose challenges to South Korean firms, IHS Markit pointed out.

"But the result, in part, is because of Korean companies' shift of their focus to high-end products, such as organic light-emitting displays (OLEDs) and QLED ones to lead the premium TV market," an industry insider said. 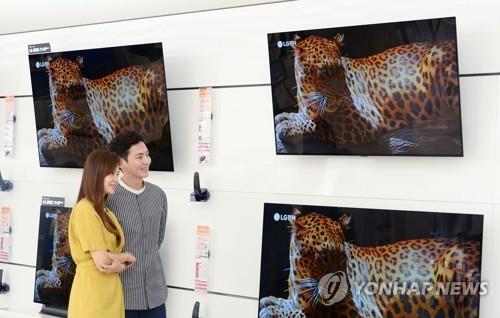