The comment by David Malpass, under secretary of the U.S. Treasury for international affairs, came after Hong Nam-ki, the minister of economy and finance, asked the World Bank to play a leading role in providing assistance for development of North Korea in case there is meaningful progress on denuclearization.

U.S. President Donald Trump is set to have a second summit with North Korean leader Kim Jong-un on Feb. 27-28 in the Vietnamese capital of Hanoi. The two men are expected to deliberate on the denuclearization of North Korea. 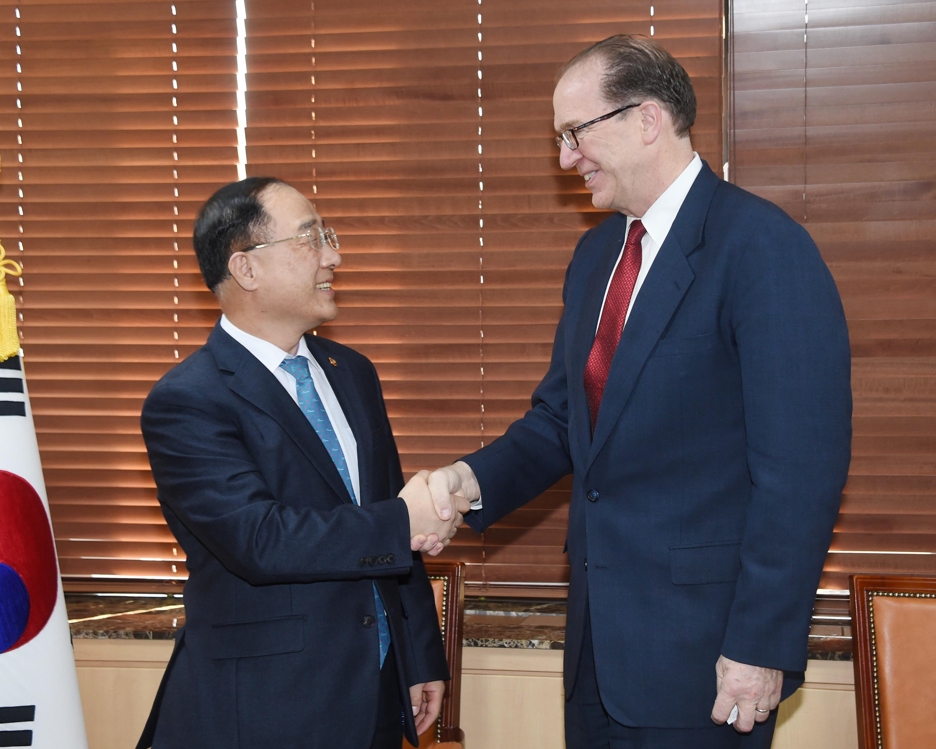 In 2018, South Korean President Moon Jae-in said in the U.N. General Assembly that Kim has expressed willingness to join the International Monetary Fund, the World Bank and other international agencies.

Malpass also appealed for South Korea's backing for his becoming the next president of the Washington-based lending institution. Hong said South Korea is behind Malpass.

Malpass said he had a very good meeting with Hong with "the discussion about the World Bank and ways to have more growth in various developing countries."

South Korea is the 15th largest shareholder of the bank, with 1.65 percent as of the end of June 2018, according to the Ministry of Economy and Finance.

Hong then renewed calls for an exemption from possible U.S. tariffs for South Korean automobiles.

Malpass said he is well aware of South Korea's concerns and said he will convey them to U.S. Treasury Secretary Steven Mnuchin and Commerce Secretary Wilbur Ross.

In December, Hong made a similar request directly to Mnuchin during a phone conversation.

Washington is set to issue a report on its ongoing probe into foreign automobiles by Feb. 17.

South Korea is worried about potential U.S. tariffs on South Korean automobiles on national security grounds based on Section 232 of the Trade Expansion Act.

The country has already made concessions on automobiles in the revised bilateral free trade deal that went into effect in January, but Trump has threatened stiff tariffs on foreign vehicles.