SEOUL/GANGNEUNG, Feb. 18 (Yonhap) -- A little over a year has passed since South Korea made its Winter Olympic debut in men's hockey. As the host country, South Korea received an automatic spot at the PyeongChang Winter Games, and the team likely wouldn't have made it to the competition if it were forced to qualify for it.

Still, in the years leading up to the Olympics, the upstart squad made significant progress under head coach Jim Paek, a former Stanley Cup-winning defenseman who took over the program in July 2014. In the world rankings, it jumped from 23rd in 2013 to 18th prior to PyeongChang 2018 and then to 16th after the Olympics. South Korea was relegated to the third division in the International Ice Hockey Federation (IIHF) World Championships in April 2014. And three years later on Paek's watch, South Korea earned a promotion to the elite division for the first time.

Though South Korea lost all four games at the Olympics, it didn't get blown out of the water every game, as some pessimists had predicted. 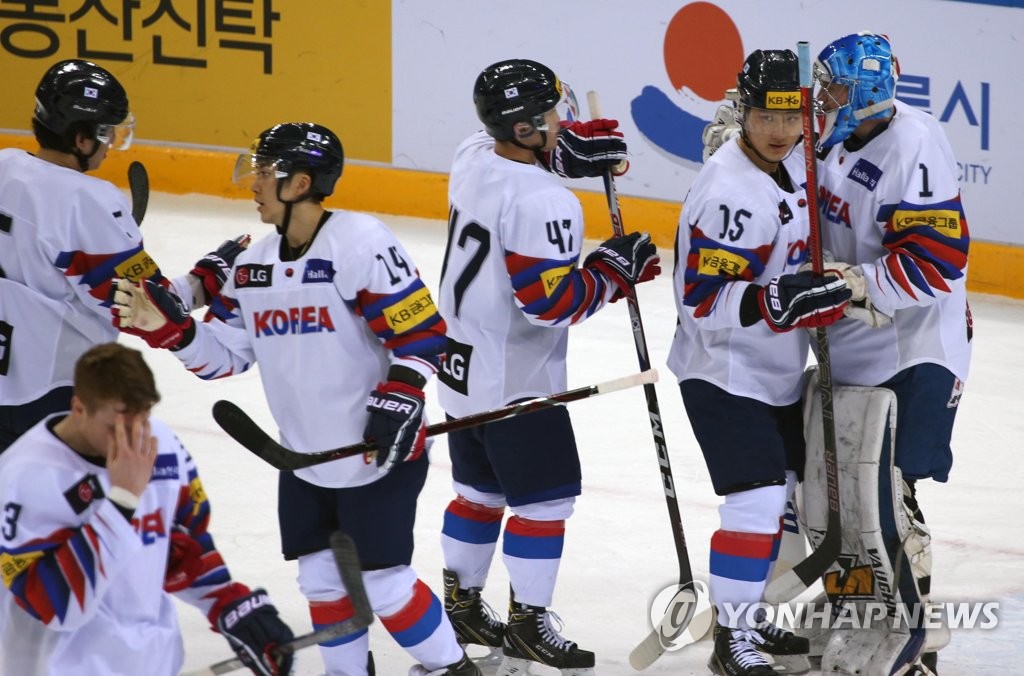 Now in February 2019, Paek's team finds itself at a crossroads. Some of the positive vibes and excitement for the future in the post-Olympic days have given way to uncertainty. The shallow talent pool also paints a dark picture of the future in a country where hockey is still a niche sport.

Paek does have a handful of players still in their early 20s who have been getting some reps with mainstays. The Legacy Cup, a tournament hosted by South Korea two weeks ago to commemorate the first anniversary of PyeongChang 2018, served as an audition for these players, with the world championship a couple of months away.

"They have to keep developing and keep working hard," Paek said of his young players after a 5-1 loss to Kazakhstan at the Legacy Cup on Feb. 7. "We'll have a good training camp in April to pick our final roster (for the world championship). We have to pick those young guys that will learn from our good veterans."

Conspicuous by their absence at the Legacy Cup were a few naturalized players who represented South Korea at the 2018 Olympics. Canadian-born Michael Swift and Bryan Young, and U.S.-born Mike Testwuide weren't named to the team, while forward Brock Radunske, from Canada, retired after the Olympics.

Only the goalie Matt Dalton and defensemen Eric Regan and Alex Plante -- all born in Canada -- were back on the team at the Legacy Cup. 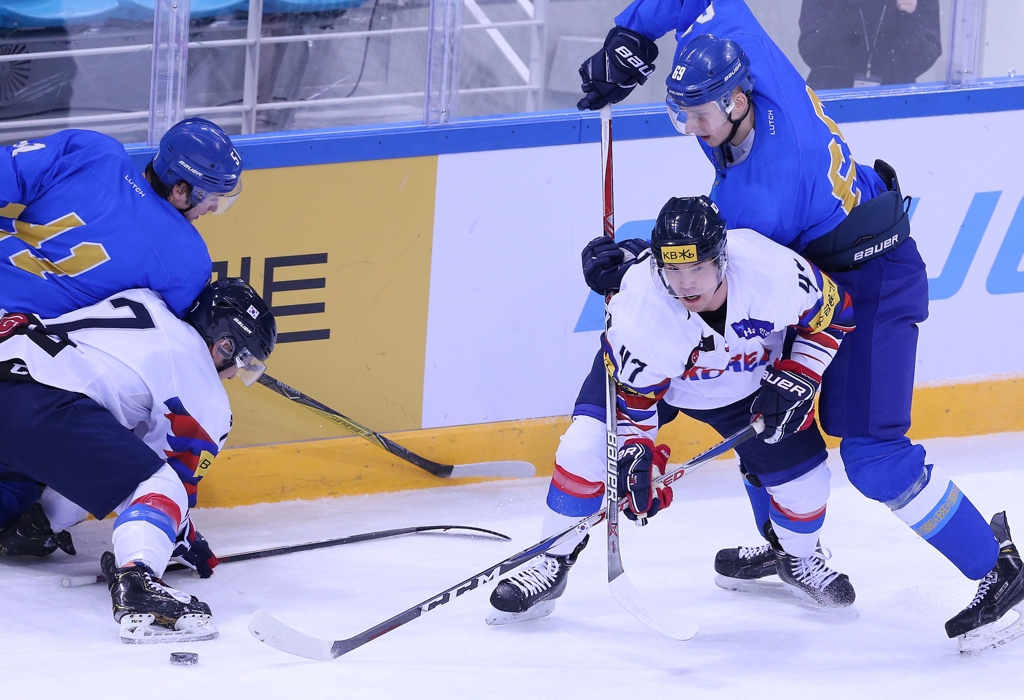 Whether the missing names will be back for the IIHF World Championship Division I Group A, scheduled for April in Kazakhstan, remains to be seen. In the meantime, Paek filled his lineup at the Legacy Cup with the likes of Jung Jong-hyun, Song Hyeong-cheol and Choi Jin-woo, defenders aged 23, 23 and 22, respectively, and a pair of 22-year-old forwards, Lee Jong-min and Lee Chong-hyun.

In net, Park Sung-je, a longtime backup to Dalton, called it quits last year at age 30, and Paek brought 23-year-old Lee Yeon-seung into the fold.

All those players saw substantial action at the Legacy Cup, in particular Lee Yeon-seung.

He made his international debut against Kazakhstan and made 21 saves in the 5-1 loss. He survived some nervy moments in the opening period, but the bottom fell out for Lee in the second period, as he surrendered three goals, including a couple of soft ones that should have been stopped.

Dalton looked all but ready to jump in from the bench, as he was watching the game with his mask on and leaning over the fence at times. But Paek stuck with Lee for the full 60 minutes.

And South Korea's lone goal was scored by Choi Jin-woo, the team's youngest blueliner at the tournament. 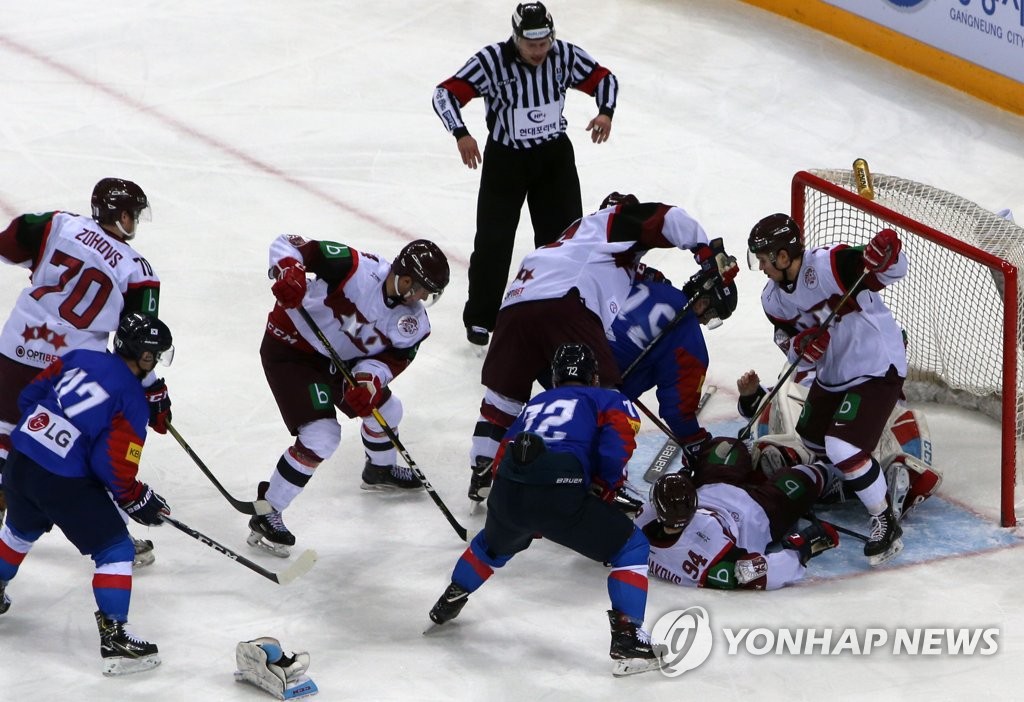 Paek said afterward that giving his young horses significant minutes was all part of "a process" for his team.

In the immediate future, South Korea needs a backup netminder in place of Park Sung-je, and some of the team's key skaters today are approaching 30 or are already there.

And Dalton, who will turn 33 in April, will have to be replaced at some point as the No. 1 goalie, and South Korea won't just keep handing out passports to Canadians or other foreign-born goalies forever.

Dalton returned to the crease for the tournament finale against Japan on Feb. 8 and turned aside 26 shots for the shutout in a 2-0 victory.

Before that game, Dalton told Yonhap News Agency that the current national team makeup reminds him of the team from a few years ago, when Paek took over South Korea and some young homegrown players were emerging as key pieces around veterans from Canada and the U.S.

"We had a lot of good players, but we hadn't really had coaching," he said. "Now, we have these guys that are excited to be here. They have a lot of energy. They haven't really played a lot. Once they start to get the experience, it's going to be like the process that we had before. I feel like they're going to start taking on roles of the older guys that were here." 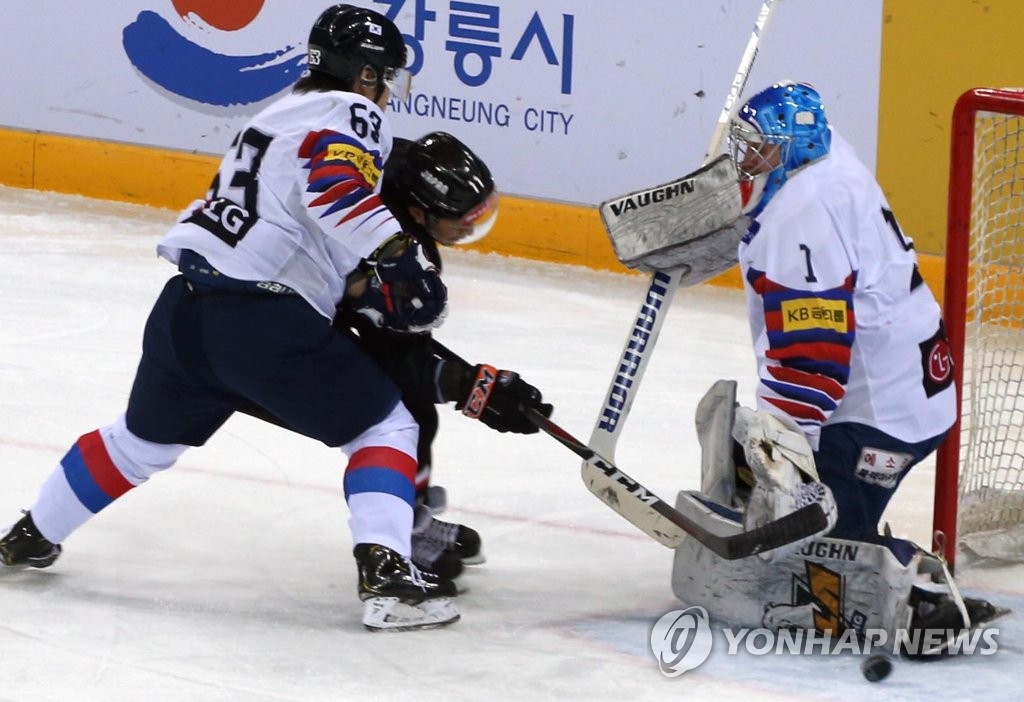 Paek spoke of the presence of "great veterans with great character" who can take younger players under their wings. He listed brothers Kim Ki-sung and Kim Sang-wook, plus Cho Min-ho, all highly skilled forwards, as solid leaders. Kim Won-jung, a 34-year-old checking line grinder, is "a great leader who takes care of everybody," in Paek's words.

"(The young players) are surrounded by great guys," the coach added. "The more they learn and watch them play, the better and better they'll get. They have potential."

The coach has been working to give his young charge some protection on the ice, while also challenging them in key situations that, in a different tournament, would have been reserved for more experienced players.

Against Kazakhstan, Jung Jong-hyun played alongside Plante, a former first round draft pick by the Edmonton Oilers, on the second defensive pair. In the next game against Japan, Song Hyeong-cheol was elevated from the third pair to the second pair, with Plante once again providing the security blanket. Jung was listed on the fourth pair with Choi Jin-woo, but coach Paek kept juggling his rearguards throughout the game, so that both youngsters had multiple shifts next to veterans like Plante and Kim Won-jun, who has been a fixture in the top pair.

And when South Korea committed three consecutive penalties in the third period while nursing a 1-0 lead, these 20-somethings saw plenty of penalty-kill minutes and successfully held Japan off the board.

The question isn't so much whether these young athletes are capable. There's a greater uncertainty about their military service status. 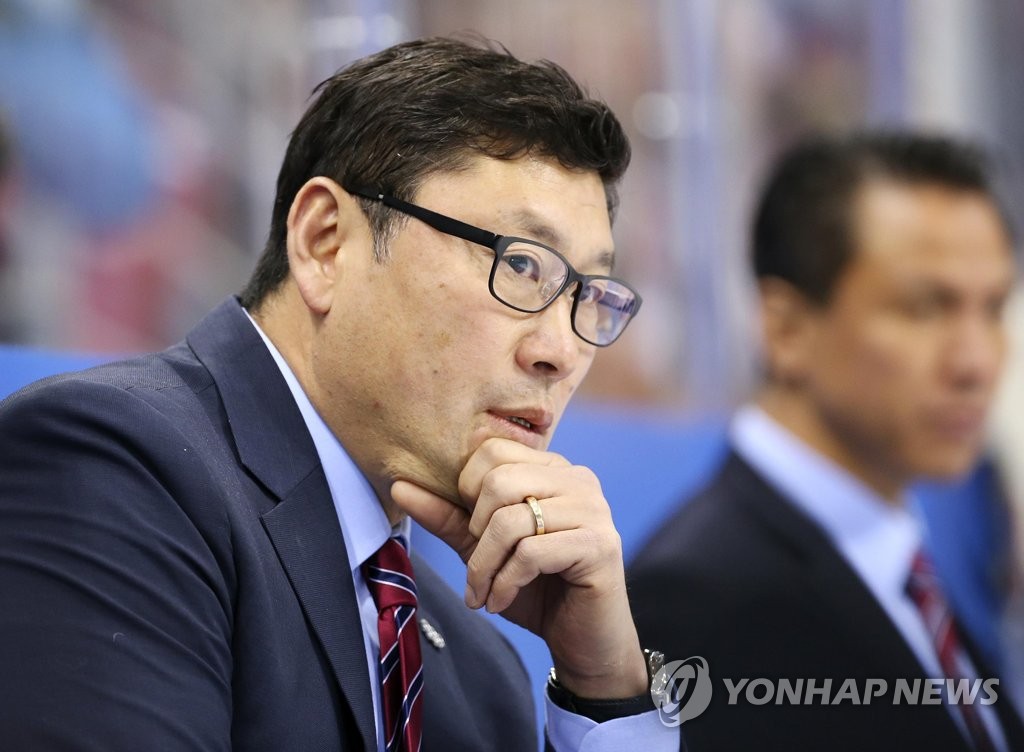 All able-bodied South Korean men must serve in the military for about two years, depending on the branch of the service. Athletes who win an Olympic medal of any color or an Asian Games gold medal are exempt. Otherwise, they have to put in their time like everyone else, but they can still play competitive sports by enlisting in the Korea Armed Forces Athletic Corps, colloquially known as Sangmu.

Sangmu's baseball, football and basketball teams compete with other professional clubs or collegiate teams, and pro athletes who complete their military service with Sangmu often make seamless transitions back to their original pro clubs.

The military unit operates teams in other sports, but after PyeongChang 2018, Sangmu decided to stop accepting new hockey players, after running a team for six years.

Sangmu had served as an important safety net for some national team mainstays like Ahn Jin-hui and Shin Sang-hoon, who were allowed to keep honing their skills in their prime years of their mid-20s while answering the nation's call.

Both were still with Sangmu when they played at the PyeongChang Olympics. Now 27 and 26 years old, Ahn and Shin were discharged from their service in January. They're the last two national team hockey players to complete their service with Sangmu.

Lee Chong-hyun, one of the top offensive prospects who was the youngest South Korean player at the 2017 Asian Winter Games at 20, has yet to perform his military duty. Choi Jin-woo, Lee Jong-min, Jung Jong-hyun and Lee Yeon-seung are in the same boat.

At least they're young enough that, if they were to enlist right away and do two years of combat duties with zero playing opportunity, they may still stand a chance at returning to competitive hockey after their discharge.

The same can't be said about Kim Won-jun, one of the national team's steadiest defensemen who will turn 28 in April. During the Legacy Cup, Ahn and Shin shared their disappointment with the folding of Sangmu's hockey team.

"Our young players are worried about their future," Ahn said. "Sangmu allowed us to continue our hockey career and keep playing for the national team. That opportunity will be gone."

Shin chimed in: "I don't think I've seen a case where a player came back successfully after being away from the game for two years. I think the national team's performance will suffer, and it's almost like we're reverting to the past (when the team wasn't as good)."

Chung Mong-won, president of the Korea Ice Hockey Association (KIHA), said he was mostly concerned about the lack of depth at the youth level.

Chung claimed there are plenty of young hockey players, but only six high school teams nationwide to accommodate them all.

"We really need to add more high school teams, but schools are reluctant to form hockey teams," Chung said. "Coach Paek and I talk often about our shallow depth and lack of fresh faces. We have about six or seven new players here (at the Legacy Cup) and hopefully the coach will figure out the right mix of players."

A gloomy outlook aside, those who are on the team must soldier on and take care of business. Up next is the Division I Group A World Championship, set from April 29 to May 5 in Kazakhstan. 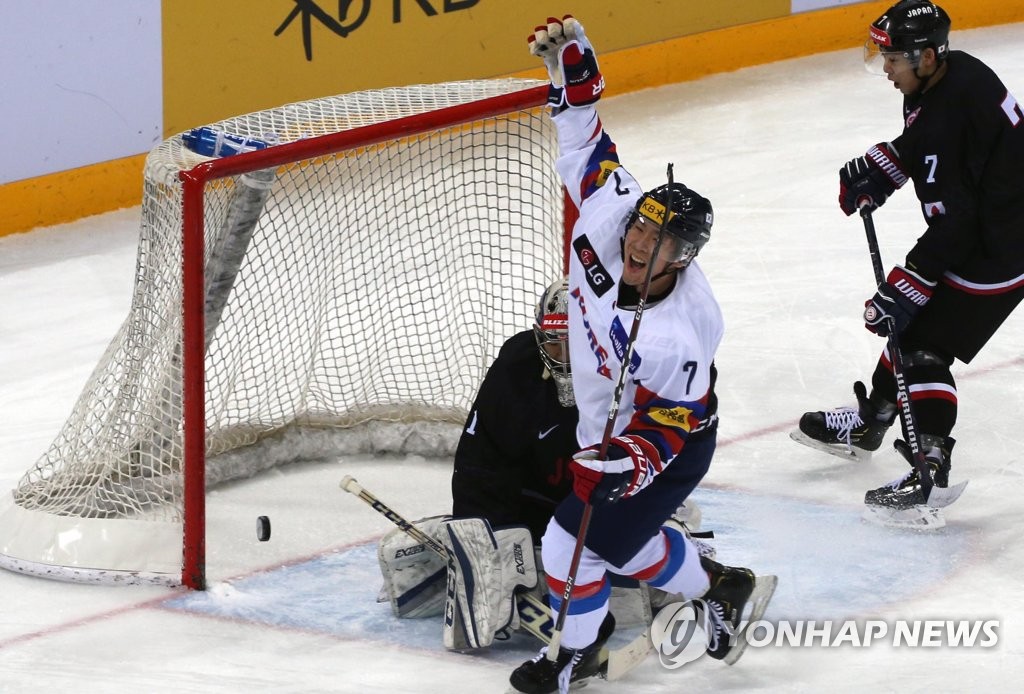 It's the second-highest level of the world championships, and South Korea must finish in the top two among six nations to earn a promotion back to the elite division for 2020. Belarus (world No. 14), Slovenia (15th), Kazakhstan (18th), Hungary (20th) and Lithuania (25th) are the other contestants. In terms of world rankings, South Korea is the third-best team in the field at No. 16.

"We have a long way to go," Ahn Jin-hui said. "We have to try to return to the top division in the world championship. Then in a couple of years, we'll try to qualify for the next Olympics (in Beijing in 2022). We have to bear down and get to work right away."

Paek, who got a three-year extension last June, said he's bracing himself for a long haul as well.

"The president (Chung Mong-won) wants sustainability. If we continue to develop and grow, then sustainability will happen," the coach said. "How do we keep moving forward? It's hard to stay at the top division (of the world championship). Everyone has to be on board and follow the president's vision and be excited about that."