Trump and Kim are set to meet in Vietnam's capital, Hanoi, Feb. 27-28 to flesh out measures to achieve North Korea's denuclearization in return for U.S. security guarantees.

"We think it is unlikely that North Korea will give up all of its nuclear weapons or production capabilities, but seeks to negotiate partial denuclearization in exchange for U.S. and international concessions," Adm. Philip Davidson, chief of the U.S. Indo-Pacific Command, said in a written statement to the Senate Armed Services Committee ahead of a hearing. 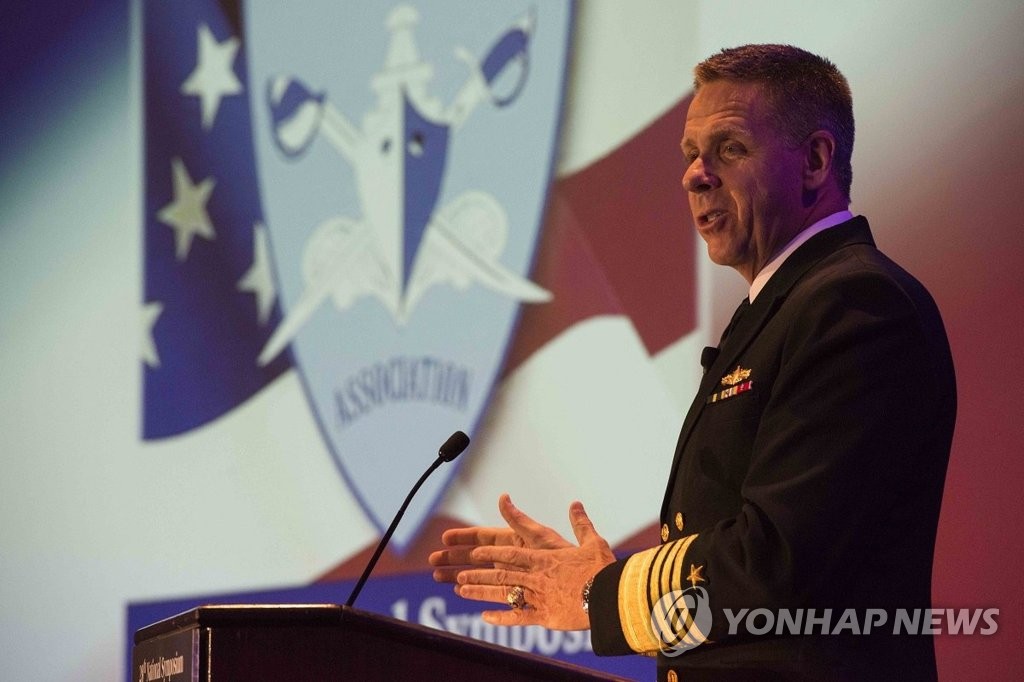 The assessment is in line with that of the U.S. intelligence community. Last month, U.S. Director of National Intelligence Dan Coats told Congress that he believes it is unlikely the North will completely abandon its nuclear weapons program because Pyongyang's leaders view it as critical to regime survival.

Still, Davidson said the first Trump-Kim summit in Singapore in June was a "significant milestone."

"And I am optimistic about another U.S.-North Korea summit," he said, noting some steps North Korea has taken so far, including what he called the "reversible" dismantlement of tunnels at its nuclear testing site in Punggye-ri.

"Yet much needs to be done to make meaningful progress," he added.

The Singapore summit was the first meeting between sitting leaders of the two nations and yielded a commitment from Kim to work toward complete denuclearization of the Korean Peninsula.

The two men also agreed to establish new relations between their countries and build a lasting peace on the peninsula.

But the exact meaning of those terms has yet to be clearly defined. The U.S. has demanded more concrete steps toward denuclearization, while the North has sought sanctions relief and a formal end to the 1950-53 Korean War.

In Slovakia earlier in the day, U.S. Secretary of State Mike Pompeo said he hopes the two sides will make "substantial progress" in the coming weeks.

"The pillars that were agreed to back in Singapore in June, I hope we make progress along each one: security and peace on the peninsula, the denuclearization in the peninsula, as well as ensuring that we create the conditions for a brighter future for the North Korean people," he said.

The Trump administration has promised economic rewards if the North follows through on its denuclearization pledge.

"North Korea will become a different kind of Rocket - an Economic one!" he added, modifying the nickname "Little Rocket Man," which he used to mock the North Korean leader after his 2017 tests of intercontinental ballistic missiles capable of reaching the U.S. mainland.

"I am clear-eyed about the fact that little to no verifiable change has occurred in North Korea's
conventional and asymmetric capabilities that continue to hold the United States, South Korea, and our regional allies at risk," he said.

Meanwhile, South Korea and the U.S. will continue to conduct military exercises at a level that is not harmful to diplomacy with the North, he added.

After last year's summit, Trump announced the suspension of what he termed "provocative" military exercises.

Abrams noted that adjustments in the exercises' size, scope, volume and timing allow them "to remain in tune with diplomatic and political requirements without sacrificing the training of essential tasks."

The general also dismissed concerns surrounding Trump's possible withdrawal of troops from South Korea. The U.S. president has complained that the Asian nation isn't paying enough for its defense.

In response to a senator's question about the need for U.S. Forces Korea to deter North Korea's conventional military threats even after the possible elimination of the regime's nuclear threat, Abrams said, "Yes, Senator, and until there is a peace treaty, because we still remain in a state of armistice, a cessation of hostilities, until such time that there is a peace treaty between all of the parties."