The unemployment rate marked the highest level for any January since 2010, when the corresponding figure stood at 5 percent, according to Statistics Korea.

The South Korean economy added just 19,000 jobs in the first month from a year earlier, the fewest since August last year when employers added just 3,000 positions.

The disappointing numbers underscored challenges in creating jobs in South Korea amid an economic slowdown.

Hong Nam-ki, the minister of economy and finance, said he "feels heavy responsibility" over the slowing pace of job growth for the second straight month.

In December, employers added 34,000 jobs from the same month in 2017, according to Statistics Korea.

In January, Hong said public companies will hire 23,284 people this year, up about 400 from a year earlier.

The unemployment rate for young adults -- those aged between 15 and 29 -- stood at 8.9 percent, up 0.2 percentage point from the previous year.

The manufacturing sector lost 170,000 jobs in January compared with the previous year due to a slowdown in the semiconductor business and corporate restructuring. The retail and wholesale sector also saw a reduction of 67,000 positions.

In contrast, the health and social welfare sectors added 179,000 jobs, and the information and communication sectors saw an increase of 94,000 jobs last month.

The statistics agency said the number of jobless people stood at 1.224 million in January, the highest level for any January in 19 years. 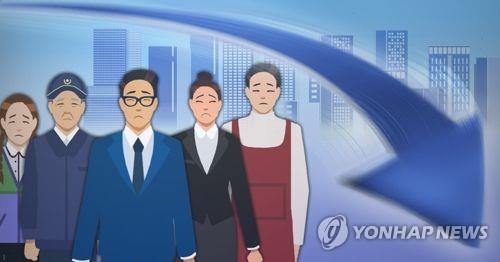