The delegation, consisting of about 250 people, crossed the inter-Korean border from Mount Kumgang on the North's east coast into South Korea. The group included leaders of South Korea's major religions, labor unions and civic groups representing women, youth and farming communities. Around 10 journalists were also among them.

This marked the first joint civilian cross-border event this year.

Their trip to North Korea came about three months after officials of the Korean Council for Reconciliation and Cooperation visited Mount Kumgang in November for joint events to call for the faithful implementation of inter-Korean summit agreements last year.

On Tuesday, the first day of the visit, the two sides adopted a joint appeal calling for implementation of the agreements that President Moon Jae-in and North Korean leader Kim Jong-un signed at their two summit meetings in April and September.

In the appeal, they also called for full-fledged cross-border exchanges and cooperation.

The South's side demanded that the appeal include a phrase calling for denuclearization, but the North rejected this, saying the issue is something to be dealt with by the leaders of the two countries. 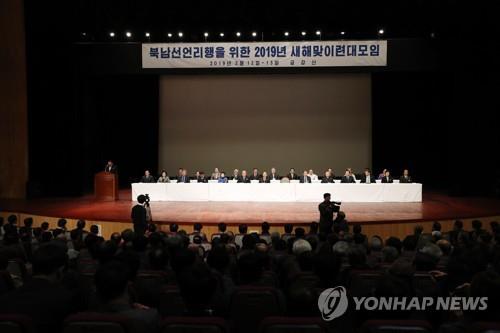 Journalists accompanying the delegation were not allowed to carry cameras, laptop computers or other equipment necessary for reporting due to sanctions imposed on North Korea.

The ban on the equipment is raising controversy as sanctions are hampering reporting on cross-border events. It also highlights a consistency issue, as there have been previous cases where journalists were allowed to carry cameras and computers to cover exchanges and contacts across the border last year.

A unification ministry official earlier told reporters that there was not enough time for consultations with the U.S. on a sanctions exemption for such devices. He added that the government will seek sanctions enforcement in a "consistent" manner.