South Korean Foreign Minister Kang Kyung-wha and U.S. Secretary of State Mike Pompeo spoke on the sidelines of an international conference in Poland ahead of this month's second summit between U.S. President Donald Trump and North Korean leader Kim Jong-un.

Trump and Kim are scheduled to meet in Hanoi, Vietnam, Feb. 27-28 to continue talks on dismantling the North's nuclear weapons program in exchange for U.S. security guarantees.

"Good meeting with Republic of Korea Foreign Minister Kang in Warsaw to discuss the denuclearization of the DPRK, strengthening our trilateral relationship with Japan, and collaborating on shared interests in the Indo-Pacific," Pompeo tweeted, using the acronym for North Korea's official name, the Democratic People's Republic of Korea.

Seoul's foreign ministry said the two discussed ways to ensure a successful summit and agreed to continue close coordination at all levels of government.

They also exchanged views on last week's pre-summit talks in Pyongyang, which involved U.S. and North Korean officials, and reaffirmed their commitment to achieving denuclearization and peace on the peninsula through a firm bilateral alliance, the ministry said.

The State Department said in a statement that the two discussed "ongoing efforts to achieve the final, fully verified denuclearization" of North Korea and updated each other on respective U.S. and South Korean engagements with the North. 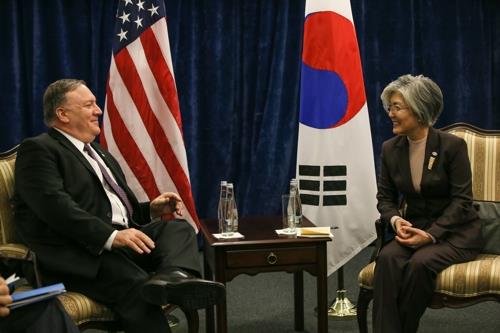