SEOUL, Feb. 15 (Yonhap) -- President Moon Jae-in reiterated the need to reform powerful government agencies, such as the police and prosecution, Friday, insisting the move will not necessarily mean less power for the organizations.

"If public authorities are for the protection of public safety and human rights, all our people will welcome strengthening of the public authorities," the president said in a meeting with the heads of most powerful government organizations, including the state spy agency, National Intelligence Service (NIS).

The meeting, held at the presidential office Cheong Wa Dae, sought to review and discuss efforts to reform the power organs that also include the prosecution and the police, one of Moon's key election pledges. 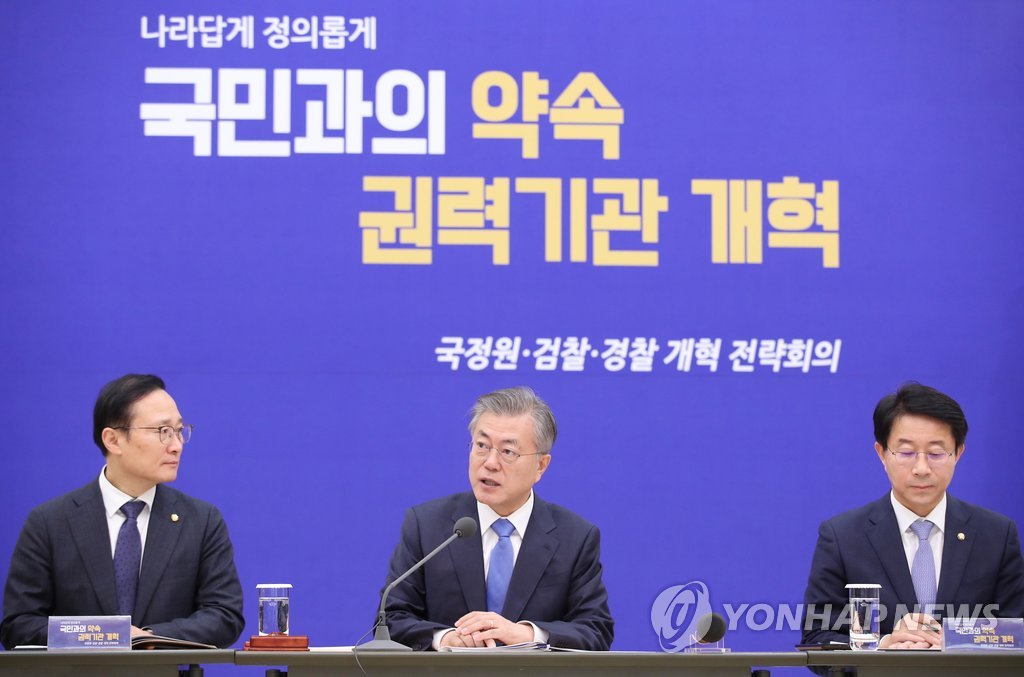 The president hailed the efforts made so far, noting the NIS has become a globally recognized agency after voluntarily shutting down its domestic affairs arm, which he said had been used under former administrations to interfere in politics.

"As a result, not a single case of corruption using government authority has been reported at the NIS, prosecution or the police under our government," said Moon.

The president insisted they needed to do more.

"The people's order is clear. They want a nation with no foul play or special privileges for a few, a country that does not allow even the smallest injustice or unfairness in everyday life," he told the meeting also attended by Justice Minister Park Sang-ki, who is in charge of the prosecution, and Internal Affairs Minister Kim Boo-kyum in charge of the national police.

Readjusting the investigative power between the prosecution and the police was another major topic of the meeting. Moon has said the move will help prevent corruption and abuse of power by the two power organs while enhancing the mechanism of checks and balances between the two.

The president said reforming the government organizations with power will also be a way to discontinue what he called a corrupt practice that dates back to the 1910-45 Japanese colonial rule of Korea.

"The police hunted down independence fighters, suppressed independence activists and even monitored and controlled what the people thought and believed. The police failed to reform even after the country's liberation by incorporating the same police officers from the Japanese colonial rule," the president said.

"Reforming the NIS, prosecution and police is not a matter of politics or aiding the incumbent government. It is a daunting task of our time that is aimed at setting the values of a democratic nation straight," he added.

The president also called for parliamentary support in institutionalizing the envisioned changes to limits or increases in power of the government organizations.

"We must make sure the mechanism of checks and balances between the power organs will work permanently through legislation." 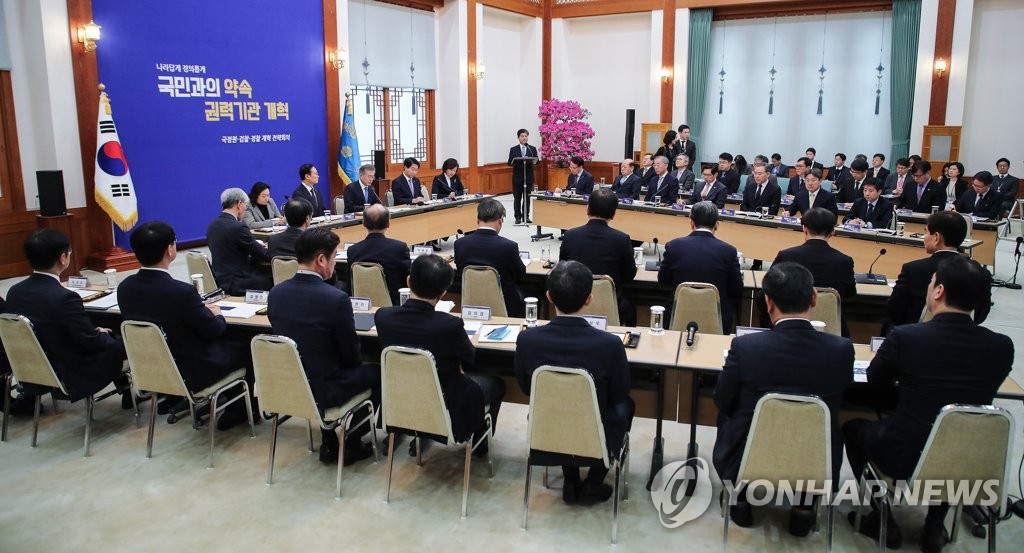 Moon again highlighted the importance of efforts to make changes permanent in his closing remarks, according to Cheong Wa Dae spokesman Kim Eui-kyeom.

"What I fear is that despite such great work so far, it may all go back to the way it was unless we realize legal revisions," the president was quoted as saying.

"Also, there may be issues that may not be legislated. Should that be the case, I hope we will seek other ways to implement such issues to the maximum extent without legislation," he added, according to the spokesman.

Friday's meeting involved several officials from the ruling Democratic Party, including its floor leader, Hong Young-pyo, and Rep. In Jae-keun, chairperson of the parliamentary committee on public administration and security.