SEOUL, Feb. 15 (Yonhap) -- South Korea will push for the signing of a trilateral treaty with China and Japan to fight fine dust pollution in Northeast Asia during their environment ministers' meeting slated for November this year, government officials said Friday.

The decision to propose a trilateral treaty on fine dust reduction was reached during the first meeting of the Special Committee on Tackling Fine Dust, a government-civilian policy deliberation committee established under the Special Act on Particulate Matter Reduction and Management that took effect on the day. 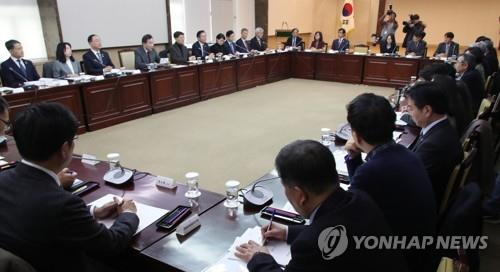 The special law on fighting fine dust pollution has established the legal grounds for local governments to impose mandatory restrictions on coal power plants and other heavy emitters of dust particles.

At the special committee meeting, Prime Minister Lee Nak-yon, representatives of local governments and private experts also discussed comprehensive measures to reduce ultrafine dust particles, which are known as a class one carcinogen.

They decided to put policy priorities on intensive management of domestic emitters of fine dust and closer cooperation with China, officials said, explaining the proposed treaty is aimed at inducing China's responsible measures to reduce fine dust in the region.

The National Institute of Environmental Research, a think tank under the Ministry of Environment, has recently said that external sources, mostly from China, accounted for 75 percent of South Korea's ultrafine dust air pollution in January.

The National Information Resources Service, an affiliate of the Ministry of the Interior and Safety, also said last month that China is largely responsible for fine dust particles over the Korean Peninsula after analyzing fine dust flows over the area of Incheon, west of Seoul, from January 2015 to March 2018.

The Beijing government, on the other hand, has persistently denied any responsibility for fine dust concentrations over South Korea.

"For the sake of China, we need to demand Beijing's cooperation in tackling this problem," Lee said at the committee meeting.

"It has already been proven that fine dust mainly originates from China. Fine particles cause Chinese people much greater pain. We repeat our call for China's responsible cooperation," he stressed.

Domestically, the government will seek to reduce the number of diesel vehicles, which are said to be responsible for about 22.1 percent of fine dust pollution in the capital area.

Under the special law, local governments are obliged to take emergency dust reduction measures if the daily average level of ultrafine particles, smaller than 2.5 micrometers in diameter, exceeds 50 micrograms per cubic meter, and the figure is forecast to top that level again the following day.

If the emergency measures are enforced, heads of local governments have to strictly regulate the operation hours and utilization rates of coal power plants and other large-scale dust emission facilities. Construction sites will also be ordered to reduce the length of their operations.

In this regard, the special committee agreed to increase the number of power plants to be regulated by the special law from 36 to 47.

With the implementation of the special law, South Korea aims to reduce its fine dust emissions by 35.8 percent in terms of the 2014 level by 2022.