Lee Hae-chan, chairman of the ruling Democratic Party, issued the forecast at a National Assembly conference, while reflecting on his recent meeting with U.S. Special Representative for North Korea Stephen Biegun in Washington.

"It has come to be my impression that the (summit) will make some progress," Lee said at the conference on peace on the Korean Peninsula. 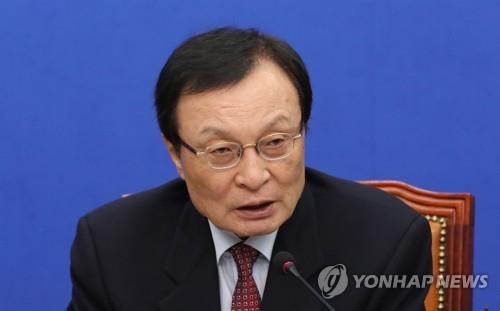 Lee also quoted Biegun as saying the U.S. and the North may have to continue their negotiations even after the Hanoi summit.

"It was impressive that the (U.S.) showed willingness to continue its negotiations to resolve problems after the summit. It's difficult to speak more concretely but I had an impression that judgment had already been reached on several issues," said Lee.

"I also observed some apprehension in the U.S. about a complete denuclearization," he said, adding he had the impression that some American politicians didn't appear to have sufficient information on North Korea's latest moves and trends.

Lee said the U.S. politicians seemed to still speak about the current situation in North Korea based on their experience of visiting the North in the 1990s, calling for more dialogue between the political circles of Seoul and Washington.