BERLIN, Feb. 15 (Yonhap) -- South Korea's foreign minister called for cooperation with Japan on Friday ahead of the planned second summit between U.S. President Donald Trump and North Korean leader Kim Jong-un, despite diplomatic tensions over historical and other issues between the two Asian neighbors.

Foreign Minister Kang Kyung-wha made the remarks as she began bilateral talks with her Japanese counterpart, Taro Kono, in Berlin on the sidelines of a security conference.

"Ahead of the second and important North Korea-U.S. summit, cooperation between South Korea and Japan is especially important," Kang said, adding that she expected to hold "frank and constructive" talks with Kono.

Kono also said he hoped to frankly exchange opinions with Kang ahead of the planned summit between Trump and Kim, although there are "many difficult issues" between Seoul and Tokyo. 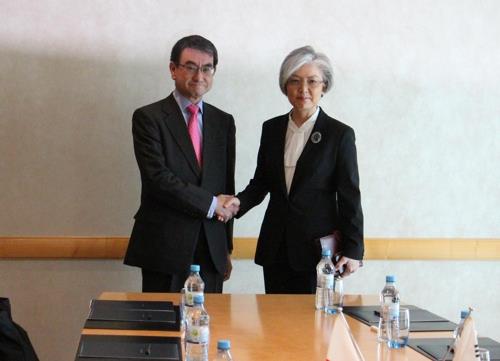 Aside from that, Kang and Kono are expected to discuss cooperation to support preparations for the Feb. 27-28 summit between Trump and Kim in Hanoi.