TUCSON, United States, Feb. 18 (Yonhap) -- All-Star catcher Yang Eui-ji is known as a man of few words, but with his new Korea Baseball Organization (KBO) club NC Dinos, he has become a talkative player who likes to throw jokes to teammates.

"For the first time in my life, I'm enjoying shooting the breeze with my teammates," Yang told Yonhap News Agency during his team's spring training in Tucson, Arizona, on Monday.

It's a sign that Yang is adjusting well to his new club, the Dinos.

After playing 13 years for the Doosan Bears, Yang joined the Dinos in December after signing a four-year deal worth 12.5 billion won (US$11 million). It was the most lucrative deal for a catcher in KBO history. 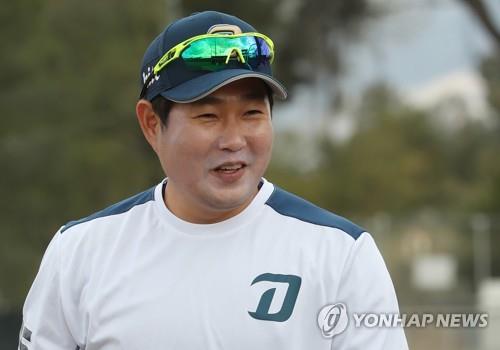 Yang, 31, admitted that at first he had concerns about adjusting to a new environment, but thanks to his two old teammates, he found no problem mingling with the players on the Dinos.

Yong Deok-han and Son Si-heon were Yang's teammates on the Bears. In particular, Yong, who played with Yang from 2010 to 2011, is now a battery coach for the Dinos and is closely working with him.

"When I was young, I learned a lot from Yong, and I'm still learning from him," Yang said. "It doesn't feel strange at all."

"Son give me lots of advice on the Dinos," Yang said. "Other people are also helping me a lot, so I don't feel lonely. I'm having fun training here."

As a veteran, Yang said he is approaching young players first and doing his best to get to know them.

"Many young players think I'm a difficult person, so I approach them and start conversation," he said. "It felt strange at first, but now I'm used to talking with them and throwing jokes."

Yang has long been considered the most complete catcher in the KBO, with a rare blend of offensive skills and defensive prowess behind the plate. He is a career .299 hitter with five 20-homer seasons under his belt. He also has four Golden Gloves.

The Dinos hope Yang can boost the club's performance and serve as a mentor to young players. Yang, the 2016 Korean Series MVP, said he is ready to play well in the 2019 season.

"In order to keep your head up in front of young players, you have to play well," he said. "So far, I've been doing well in my spring training without injuries. I'll be in my best form when the new season starts." 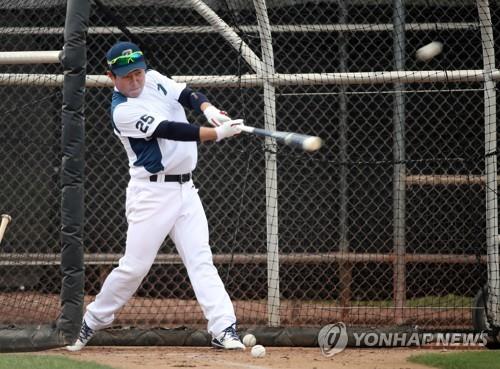 With help of old teammates, All-Star catcher has no problem adjusting to new club

With help of old teammates, All-Star catcher has no problem adjusting to new club