WASHINGTON, Feb. 19 (Yonhap) -- U.S. President Donald Trump said Tuesday that he is in no rush to denuclearize North Korea, although that remains his goal.

Trump is due to meet North Korean leader Kim Jong-un in Hanoi, Vietnam, on Feb. 27 and 28 to discuss the dismantling of the regime's nuclear weapons program.

"I'd just like to see, ultimately, denuclearization of North Korea," he told reporters at the White House, before adding that he has "no pressing time schedule."

"As long as there's not testing, I'm in no rush," he said, referring to the lull in North Korea's testing of nuclear weapons and ballistic missiles since late 2017.

"If there's testing, that's another deal," Trump added. "I hope that very positive things are going to happen." 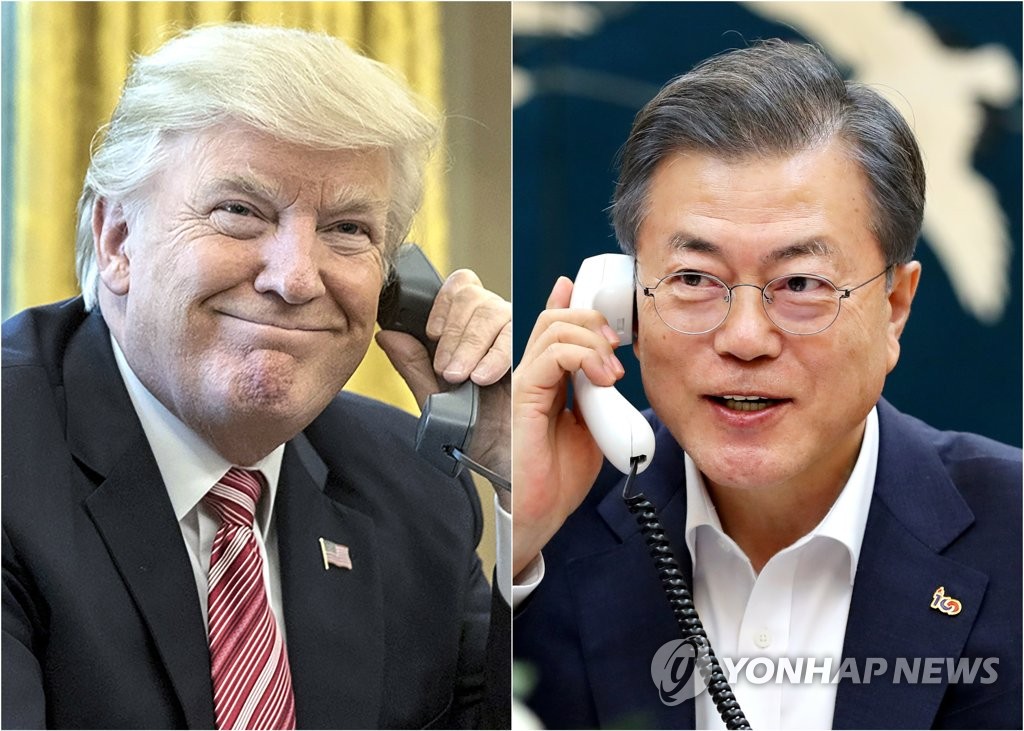 The first Trump-Kim summit in Singapore in June led to North Korea's commitment to "work toward" complete denuclearization of the Korean Peninsula in exchange for security guarantees from the U.S.

Next week's meeting is expected to flesh out the deal amid criticism that North Korea has yet to take concrete steps to dismantle its nuclear weapons and ballistic missile programs.

His counterpart, Kim Hyok-chol, was seen in Beijing earlier in the day apparently en route to the Vietnamese capital.

Trump's repeated emphasis on "no rush" and "no testing" has led some observers to worry that the president doesn't care much about disarming the North as long as the regime refrains from testing nuclear weapons and ballistic missiles that threaten the U.S.

Last week he said, "I'm in no rush for speed. We just don't want testing."

"Our policy goals haven't changed at all," department deputy spokesperson Robert Palladino said at a press briefing. "We remain confident in the commitments made by President Trump and Chairman Kim, that those commitments made at the Singapore summit will be fulfilled, and it's Chairman Kim's commitment to denuclearization upon which the world is focused right now and that remains our goal."

Trump said he spoke on the phone with South Korean President Moon Jae-in earlier in the day to discuss the upcoming summit and that he plans to call Japanese Prime Minister Shinzo Abe on Wednesday.

Despite skepticism from even within his administration, the U.S. president has remained hopeful for progress in North Korea's denuclearization and dangled the prospect of economic rewards for the impoverished regime.

"I really believe that North Korea can be a tremendous economic power when this is solved," Trump asserted. "Their location between Russia, China, and South Korea is unbelievable. I think that North Korea and Chairman Kim have some very positive things in mind, and we'll soon find out."

Trump has praised the North Korean leader, saying they have a great relationship and that they "fell in love."

He has contrasted his efforts with those of his predecessor, Barack Obama, saying he believes the former president would have gone to war with the North, and that Abe has nominated him for the Nobel Peace Prize.

South Korea's presidential office quoted Moon as telling Trump that Seoul is willing to boost inter-Korean economic projects to lessen the burden of the United States in offering concessions for the North's denuclearization.

The two leaders agreed to remain in close communication following the summit, the White House said.

Washington is reportedly considering various options, including the exchange of liaison officers, a partial exemption of economic sanctions on the regime, and a peace declaration to formally end the 1950-53 Korean War.

(3rd LD) Trump says he is in no rush to denuclearize N. Korea

(3rd LD) Trump says he is in no rush to denuclearize N. Korea