SEOUL, Feb. 20 (Yonhap) -- With their second meeting just a week away, U.S. President Donald Trump and North Korean leader Kim Jong-un are facing the daunting task of crafting a road map to fulfill their first summit agreement on the "complete denuclearization" of the peninsula.

Uncertainty abounds over whether they can strike any concrete deal at their summit on Feb. 27-28 in Hanoi, as the recent working-level negotiations between Washington and Pyongyang appear to have made little progress.

Trump's repeated mentions of "no rush," coupled with Pyongyang's reluctance to take unrequited disarmament steps, have raised the prospect of the two leaders settling for yet another vague deal in the upcoming summit.

But at the time time, the American president's push for the "ultimate" denuclearization goal and Kim's pressing need for sanctions relief to advance his economic agenda have heightened expectations for anything but an ambiguous deal.

"I'd just like to see, ultimately, denuclearization of North Korea. I think we will see that ultimately," Trump told reporters Tuesday at the White House. He then added that he has "no pressing time schedule." 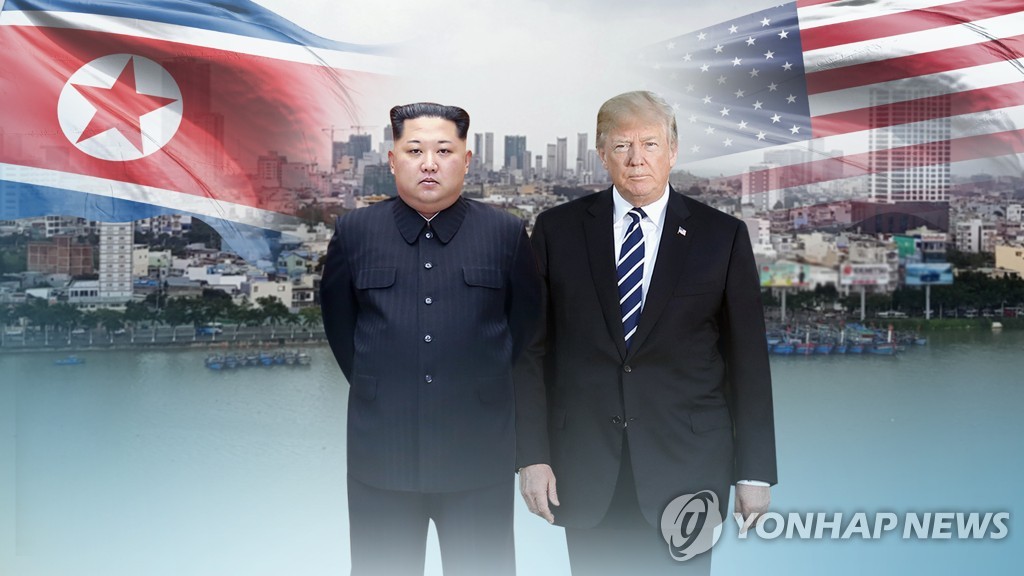 Even if the two leaders face difficulty forging a comprehensive denuclearization plan, they are likely to agree on specific initial steps that Kim has already offered to take in return for Washington's corresponding moves.

During his third summit with South Korean President Moon Jae-in in Pyongyang in September, Kim agreed to dismantle a key missile engine testing facility and launch pad in Dongchang-ri on the country's northwest coast in the presence of international experts.

He also offered to shut down the mainstay nuclear complex in Yongbyon, some 90 kilometers north of Pyongyang, should the United States take measures correspondingly.

Detractors say the Yongbyon complex is a mere dilapidated part of the North's nuclear facilities, with many in operation elsewhere, while others say the dismantlement of the complex itself, which is home to nearly 400 buildings, may be a prodigious undertaking.

"The contours of the initial disarmament steps have already been known as Kim stated during his Pyongyang summit with Moon, and now the Trump-Kim summit may focus on what additional steps the North can take," Koh Yoo-hwan, a professor of North Korean studies at Dongguk University, told Yonhap News Agency.

"After all, the scale of what could be a package deal from the upcoming summit may hinge on what corresponding measures the U.S. will take," he added.

Washington has so far pressed the North to take much more sweeping denuclearization measures, such as a full declaration of its nuclear and missile programs -- a step Pyongyang has equated with the listing of air strike targets.

"Before the process of denuclearization can be final, we must also have a complete understanding of the full extent of the North Korean weapons of mass destruction missile programs," Stephen Biegun, Washington's top envoy for North Korea, said during a speech at Stanford University last month.

He also called for an agreement on expert access and monitoring mechanisms of key nuclear sites and stressed the need to ensure the removal and destruction of stockpiles of fissile material, weapons, missiles, launchers and other weapons of mass destruction.

In exchange for such rigorous steps, the North has a catalogue of demands that may include partial sanctions relief, increased humanitarian aid and the establishment of a U.S. liaison office in Pyongyang.

Pyongyang has also pushed for a declaration of a formal end to the 1950-53 Korean War that it apparently believes would be helpful for its security.

Critics say the North could use the political declaration, albeit not legally binding, to demand the withdrawal or drawdown of U.S. troops in South Korea or the elimination of America's nuclear umbrella over South Korea.

Kim Dong-yup, a professor at Kyungnam University's Far East Institute, said that at next week's summit, Trump and Kim may specify the initial steps for Pyongyang's denuclearization and Washington's compensation, and broadly agree on what will follow those steps.

"If they agree on a rudimentary denuclearization process in a specific way, hopefully with a timetable, then they could offer a broad picture of their final goals -- a final, fully verified denuclearization for Trump and complete removal of sanctions and security assurances for Kim," he said.

According to South Korea's 2018 defense white paper published last month, Pyongyang possesses some 50 kilograms of weapons-grade plutonium and a "considerable" amount of highly enriched uranium. About 6 kilograms of plutonium is required to build a single bomb.

As for its weapons delivery capabilities, the North has a wide assortment of ballistic missiles.

In November 2017, the North claimed to have successfully tested an intercontinental ballistic missile, the Hwasong-15, capable of striking the continental U.S. and declared the completion of its nuclear armament.