SEOUL, Feb. 20 (Yonhap) -- The government announced Wednesday it has detected 182 suspected hiring irregularities at over 1,200 public companies and institutions, concluding its three-month-long inspection into fairness and transparency in their employment practices.

The announcement came after the Anti-Corruption & Civil Rights Commission and the finance, interior and labor ministries conducted a joint inspection of employment situations at 1,205 public institutions from November to January. 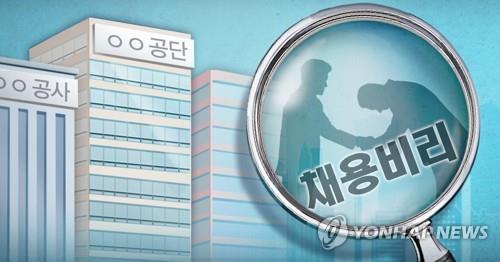 The inspection was conducted following the eruption of a massive hiring scandal at Seoul Metro, which is run by the Seoul Metropolitan Government. Seoul Metro converted 1,285 contract workers to permanent employment status as of March last year, and among them, 108 people were relatives of current and former employees of the operator. The scandal sparked a wave of protests from young job seekers, as well as from opposition parties.

The government's joint inspection focused on newly hired employees since 2017, and non-regular employees who had changed their status to regulars, from January 2014 to October 2018, officials said.

The government inspectors concluded that disciplinary punishments or investigations are warranted in 182 cases of suspected hiring irregularities at the public institutions.

They said they will request investigations into 36 cases and demand disciplinary punishment for the remaining 146 cases.

In 16 cases, favors appeared to have been offered to relatives of sitting executives and employees at the public institutions, they noted.

As a result, a total of 288 incumbent employees at the public institutions will be subject to an investigation or disciplinary punishment, they said.

"It is regrettable that employment irregularities still exist (at public institutions). The government will take reform measures in order to not disappoint many young job seekers," Park Eun-jeong, chairperson of the Anti-Corruption & Civil Rights Commission, said.