SEOUL, Feb. 20 (Yonhap) -- A new suspense thriller, "Idol," which will hit South Korean screens next month, brings together two of the most high-profile Korean film actors to explore the destructiveness of blind human desires, the film's director and cast members said Wednesday.

The film is the first collaboration between the two central actors -- Han Suk-kyu and Seol Kyung-gu -- in their long film careers. Another award-winning actress, Chun Woo-hee, joined the film in a main role.

For the film's director, Lee Su-jin, it is the first film release since his 2013 film "Han Gong-ju" and second work with Chun following the 2013 movie, which brought her the best actress award from South Korea's Blue Dragon Film Awards.

The new film premiered at the Panorama section of the 2019 Berlin International Film Festival last week.

The film is a story of idol worship involving the two main characters brought together by a tragic car accident. Han plays Ku Myong-hoe, an ambitious political aspirant whose pursuit of public office faces a major crisis after his son causes a deadly car accident. Yoo Joong-sik, played by Seol, loses his cherished son in the accident and sets out to find the truth behind a mystery of the death, while Ku tries to fabricate the case.

In pursuit of their respective goals, the two men go in search of Choi Ryeon-hwa, played by Chun, the mysterious wife of the dead son, who holds the key to the car accident case.

"There is in the film a man who pursues his idol and another man who finds that the idol he has been pursuing is a hollow thing as well as a scary, powerful woman who is not even in the position to seek an idol," director Lee said in a press conference announcing the release of the film.

Lee wrote the film's scenario more than 10 years ago. 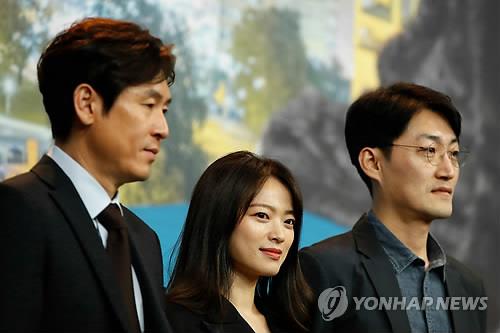 "Looking back on my life, life is a series of inevitable decisions and choices ... as I filmed this movie I thought about what the criteria should be for such endless decisions (and choices)," Han said.

"All the main characters in the film make foolish decisions and no one goes for the right choice, resulting in a catastrophe. This film is the epitome (of foolish human decisions)," he said. "I hope audiences will think about that as they watch the film."

"I hope this movie will be thought-provoking and make people imagine which decision they would make if they were in the same situation," Lee said.

"One's dream or belief becomes a sort of idol it they are pursued blindly," the director said, of the film's title.

Even for Seol, a winner of top cinema awards, collaboration with Han, who has arguably one of the highest-profile filmographies in South Korea, comes as a thrill.

"When I first started out as an actor, Han was literally burdening the whole South Korean movie industry alone. He was the idol of all the actors and actresses then," Seol said.

Asked to name the idol he blindly pursues, Seol said, "It might be acting. It makes me frolic once and want to die the next time. It is an endless job."

"The two men are acting gods in South Korea. It is very unusual to see them both in one film," Chun said of her experience of shooting with Han and Seol.

"As it is a rare combination, not to mention the honor I have to work with them, I thought it would be something unprecedented if it is made into a film," she said.

It was also her chance to pay back to director Lee, whose film "Han Gong-ju" launched her cinematic career.

"All the three people are actors and actresses any director would hope to work with," Lee added. 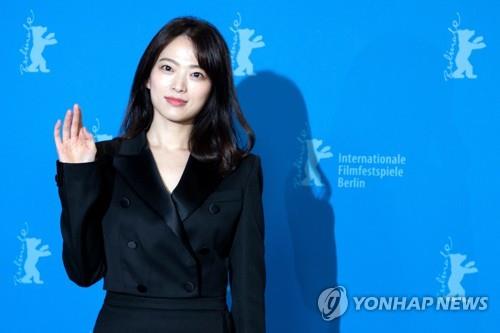