At Japan's request, Cho met Ambassador Yasumasa Nagamine for "routine communication through diplomatic channels," the official said on condition of anonymity. He did not elaborate further.

Observers said that Nagamine might have protested a South Korean maritime survey ship's recent navigation through waters near the easternmost islets of Dokdo, to which Japan has claimed sovereignty.

The two sides might have also discussed Tokyo's call for an apology over National Assembly Speaker Moon Hee-sang's remarks in a recent media interview in which he called Japanese Emperor Akihito "the son of the main culprit of war crimes."

Seoul and Tokyo have also been in a dispute over South Korean court rulings last year against Japanese firms for wartime forced labor.

Last month, Tokyo requested official talks with South Korea over the issue, saying that any reparation-related issues were settled through a Seoul-Tokyo treaty in 1965 that normalized bilateral relations. But Seoul has yet to accede to the call.

If they fail to settle it, the case can then be referred to an arbitral commission consisting of three members -- one each from the two sides and another from a third country. 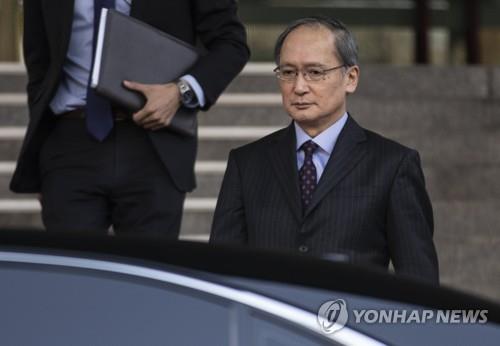