"It is hard to describe one's youthful days in a few words, but when I look back on my own, it was a time of both hope and pain," the president said in the graduation ceremony at Yuhan University in Bucheon, just southwest of Seoul.

"Also the future you will face is more uncertain than ever. I too cannot offer you any answers," he said.

The president noted that how one lives out the rest of his or her life will be up to his or her own decisions.

"But I wish to ask you to at least maintain your confidence that you may challenge the older generation as much as you wish to and that you can achieve anything," Moon said at the graduation ceremony.

"I wish you would not consider yourself too young to achieve anything or give up your dreams because of high walls created by older generations," he added. 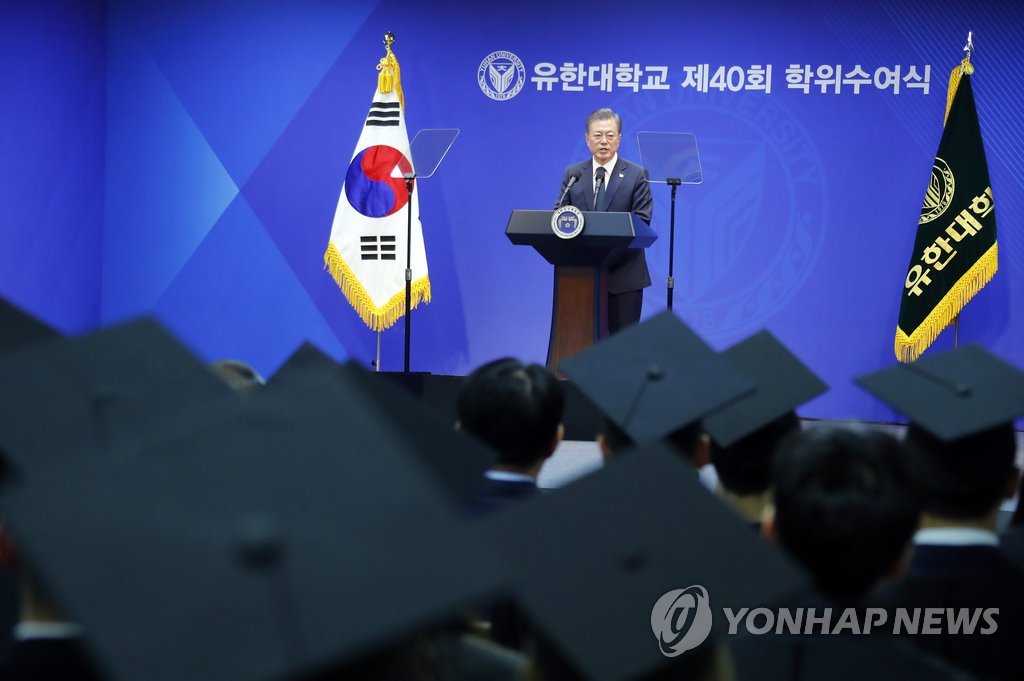 The president noted that the coming fourth industrial revolution may offer new opportunities, especially to those who are willing to change and take on challenges.

"Throughout all ages and countries, there has been no era or country that did not change. What I wish to stress to you is active efforts to deal with changes," Moon said.

The president also promised to help the young by ensuring fair competition and equal opportunities.

"I want a society where anyone can realize their dreams under fair competition with equal opportunity. It is also the wish of not only the graduates here but all young people in this land. I too will always work with you toward that wish," he said.

Moon's trip to the school apparently came as the country is gearing up to celebrate the 100th anniversary of the March 1 independence movement against the 1910-45 Japanese colonial rule.

Yuhan University is a vocational college established in 1977 by Yoo Il-han, the late founder and chairman of the country's top pharmaceutical company, Yuhan Corp., who helped organize and fund independence movements under the Japanese colonial rule.

"One of the sayings from Mr. Yoo Il-han I like is 'Do not give up what you have in mind and keep trying to the end,'" the president said.

"There is no single answer to life that applies to everyone, but each day that you live without giving up will be your answer to life," he added.