SEOUL/BEIJING/SHENYANG/HONG KONG, Feb. 21 (Yonhap) -- With North Korean leader Kim Jong-un's visit to Vietnam just days away, it remains a mystery whether he will fly or travel by train all the way to the Southeast Asian nation for his second summit with U.S. President Donald Trump.

The use of the state jet, codenamed "Chammae-1," has been viewed as one of the most likely options considering the distance of travel, but the possibility of a trip by train is also gaining attention following a senior North Korean official's visit to a train station in a Vietnamese border city.

Kim Chang-son, known as the leader's "butler," reportedly inspected a rail station in Lang Son, a city near the Chinese border on Sunday, raising speculation that Kim Jong-un could use his special train to travel all the way to Vietnam for his meeting with Trump, set for Feb. 27-28.

Reuters reported Wednesday that Vietnamese authorities are preparing for Kim's train journey, saying that his train will stop at the Vietnamese border station of Dong Dang in Lang Son province and that he will then travel 170 kilometers to Hanoi by car.

Some watchers speculate that Kim could meet Chinese officials on his way back to Pyongyang or stop by China's southeastern industrial city of Guangzhou if he travels by train.

The North's protocol team, led by Kim Chang-son, stopped at Guangzhou for a one-day stay on Friday on their way from Beijing to Hanoi.

Others say, however, that Kim is unlikely to travel exclusively by rail, suggesting the possible use of both air and rail routes.

Sources said no major preparatory efforts have been spotted near the border between North Korea and China yet.

"We haven't seen any unusual move related to Chairman Kim's possible use of a train to visit Vietnam so far," a source said.

"February is one of the busiest periods for China's rail routes due to the Lunar New Year's holiday. It would be difficult for China to let Kim travel all the way through the country during the season," another source said, addressing the possible restrictions and delays that could occur if Kim uses Chinese railroads.

If the North Korean leader opts to use his special train, it will take him at least two and a half days, or 60 hours, to arrive at the summit venue.

For his first summit with Trump, Kim flew to Singapore on a rented Air China plane, instead of the aged Chammae-1.

He could use the state jet this time because the distance between Pyongyang and Hanoi is 2,700 km, a little over half the 4,700 km flown last June.

The North's state jet Chammae-1, named after the goshawk, the country's national bird, is an Ilyushin-62M airliner that can theoretically fly up to about 10,000 km without stopping to refuel. The North's national flag-carrier, Air Koryo, uses the model.

The Chammae-1 was used when the leader's sister, Kim Yo-jong, flew to Seoul to attend the PyeongChang Winter Olympics in February last year.

The North Korean leader used the aircraft when he visited the Chinese city of Dalian for talks with Chinese President Xi Jinping in May last year.

Experts said at the time that Kim chose to fly the rented Chinese plane in apparent consideration of safety. The Air China plane, a Boeing 747-400, has reportedly been used by top Chinese officials for overseas trips.

Kim's use of the Chinese plane also underscored the North's reliance on the neighboring nation, the only country considered to have any meaningful influence over Pyongyang as its main provider of aid and diplomatic support. 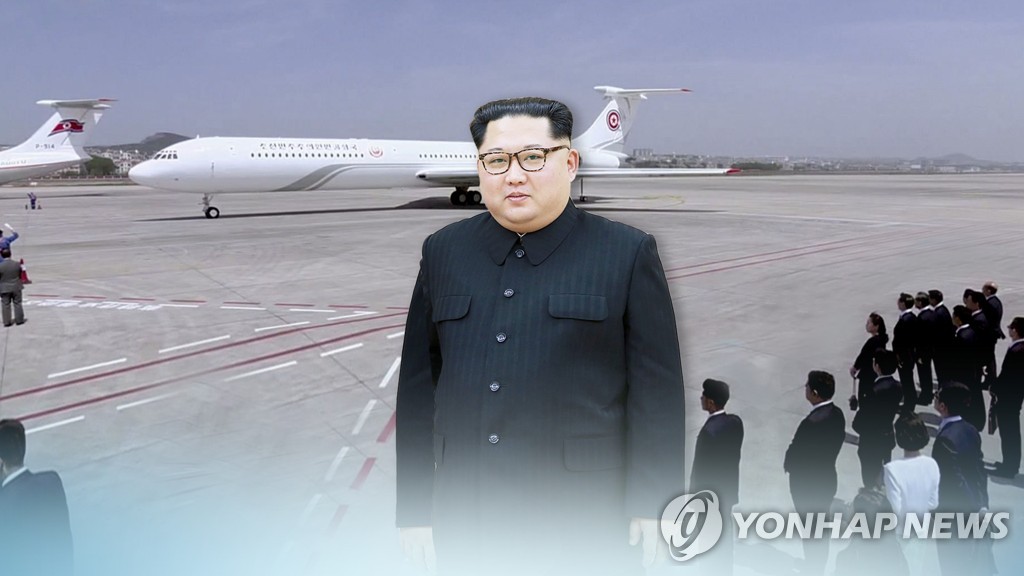