During their summit in Seoul, the leaders also agreed to complete the two nations' negotiations to upgrade their bilateral free trade pact at an early date, according to the presidential office Cheong Wa Dae. 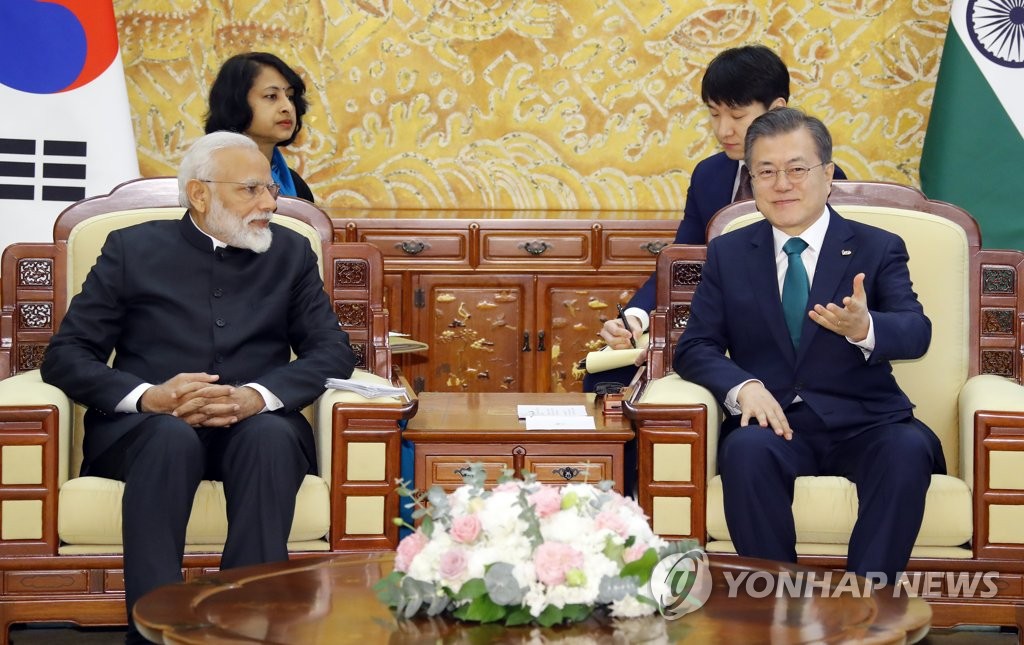 After a one-on-one meeting and an expanded session involving their aides, the two leaders agreed to bolster bilateral military ties and defense industry cooperation and to better cope with the so-called fourth industrial revolution, Cheong Wa Dae said.

Moon and Modi also agreed to speed up negotiations to enhance the countries' free trade agreement, known as the Comprehensive Economic Partnership Agreement (CEPA), which took effect in January 2010. Seven rounds of talks have been held to push for further market liberalization.

The leaders vowed efforts to closely cooperate to achieve their shared goal of more than doubling trade volume to US$50 billion by 2030. Last year, two-way trade reached a record $21.5 billion, with India becoming South Korea's seventh-largest export destination, according to government data.

To this end, the nations agreed to complete the CEPA-related negotiations at an early date and seek to improve trade-related systems for easier market access.

"We've agreed to expand the scope of cooperation in many fields ranging from infrastructure development to agriculture and fisheries," Moon said in a joint press conference with Modi.

Modi said his country regards South Korea as an important partner for its economic transformation.

South Korea and India upgraded their bilateral ties to a special strategic partnership during Moon's trip to New Delhi in July 2018. They established their diplomatic ties in 1973.

The leaders said that their signature diplomatic policies could create synergy in solidifying the nations' special strategic partnership.

Under the "Act East Policy," Modi has sought to broadly promote ties with ASEAN and East Asia.

India asked for Seoul's participation in its plan to build an additional seven nuclear reactors.

"South Korea has built nuclear reactors with its indigenous technology for the past 40 years. Its technology is internationally recognized in terms of safety and economic feasibility," Moon was quoted as saying by Kim.

"If India builds nuclear reactors, Korean companies will make a big contribution. We will appreciate it if India gives a lot of chances to Korean firms," he added.

South Korea is a main exporter of atomic power plants and operates two dozen reactors at home. But Moon's nuclear-free policy is widely viewed as putting strains on Korean exporters of reactors in exploring export channels.

Moon and Modi also agreed to expand human, cultural and tourism exchanges. South Koreans will be permitted to stay in India for three years and Seoul will issue a group tour visa for Indian people.

As for the area of future-oriented cooperation, the two nations picked space exploration and agreed to seek various projects, including a joint exploration of the moon.

They also discussed the North Korea issue ahead of a second summit between U.S. President Donald Trump and North Korean leader Kim Jong-un set for next Wednesday and Thursday in Vietnam.

"I strongly believe that the bilateral ties will be deepened as much as the friendship that we've shared so far," Moon said.