SEOUL, Feb. 22 (Yonhap) -- A Seoul appellate court on Friday upheld a lower court ruling that ordered Kia Motors Corp. to pay its employees back wages based on a new calculation that counts in regular bonuses in the "ordinary wage" used as the standard for gauging overtime, severance and other allowances.

The Seoul High Court ruled in favor of 27,400 union members of the country's No. 2 automaker, but slightly reduced the amount of back payments by excluding some meal and family allowances, initially included in the lower court's definition of the base payment.

The Kia employees filed a 1.09 trillion won (US$968.7 million) suit in 2011 demanding the company recognize regular bonuses and other allowances as part of the new ordinary wage system defined by the Supreme Court.

The top court has ruled that periodic bonuses should be added to the ordinary wage as they are defined as a salary that is paid "regularly, uniformly and on a fixed basis."

In response, Kia expressed regret over the court's ruling.

"The company will decide whether to appeal to the Supreme Court or not after thoroughly reviewing the ruling details," Kia said in a statement.

The country's business lobbies such as the Korea Employees Federation (KEF) and the Korea Chamber of Commerce and Industry also expressed similar views on the court's decision.

"The court's ruling that companies' operating profit should be used to raise wages for their employees even though such earnings also need to be used for investments in research and development activities, marketing and win-win partnerships with other companies is regretful," the KEF said in a statement.

In Korea, most businesses pay their employees a lump-sum bonus on a regular basis, aside from ordinary salary. Firms argue that when the bonus is counted as ordinary wage, they have to shoulder a huge financial burden as all other benefits and allowances, such as overtime or retirement pay, are to be recalculated based on the increased ordinary pay.

In August last year, the lower court ruled in line with the Supreme Court precedent and ordered Kia to pay 422.4 billion won in total, or about 15 million won for every employee on the payroll.

That was around 38.7 percent of what the union had requested in back payments. The automaker has said it would cost them as much as 3.1 trillion won.

In Friday's ruling, the appeals court sided with Kia workers' claim that the retroactive payment does not undermine Kia's financial health, given the company's robust earnings.

It also agreed with the lower court decision that the employees' request does not go against the principle of good faith, a civil law term meaning that one must not ask for something from the other party when it infringes on the rights of the counterpart.

Kang Sang-ho, head of the Kia union, hailed the decision and called for Kia to swiftly take actions in accordance with the court ruling.

"The suit has been going on for nine years and every one of us feels that the suit must be put to an end for the sake of the company's growth ... We truly want to settle this at the special committee," Kang said. 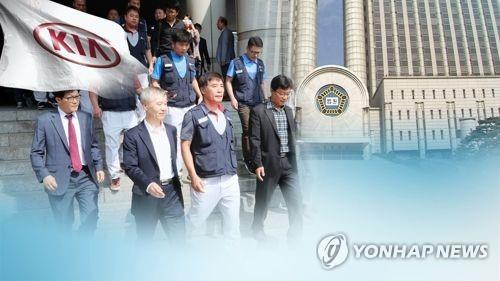