"Ambassador Bolton has canceled his travel to the Republic of Korea to focus on events in Venezuela," the National Security Council spokesperson told Yonhap News Agency on condition of anonymity.

A diplomatic source in Seoul earlier told Yonhap, "The White House has said that he will not visit Seoul due to the need to watch the Venezuelan situation."

On Wednesday, CNN reported, quoting two U.S. officials, that he will visit South Korea this week for discussions about the upcoming summit between Trump and Kim set for Feb. 27-28 in Vietnam's Hanoi.

Bolton has been one of the core hard-liners on North Korea issues.

Next week's Trump-Kim summit is expected to focus on fleshing out Pyongyang's denuclearization steps and Washington's compensation in return.

The North has demanded the U.S.' "corresponding measures" in return for its additional denuclearization steps, which may include partial sanctions relief, humanitarian aid, the establishment of a U.S. liaison office in Pyongyang and the declaration of a formal end to the 1950-53 Korean War.

But the U.S. has called for the North's concrete, substantive steps toward its nuclear disarmament, such as a full declaration of its nuclear and missile programs. 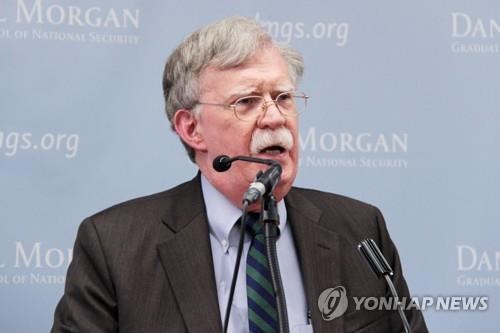