"Svaha" garnered 839,528 admissions from Friday to Sunday, according to data from the Korean Film Council on Monday.

Starring Lee Jung-jae, Park Jung-min and Jin Seon-kyu, the movie directed by Jang Jae-hyun is about a pastor who encounters mysterious figures and incidents while trying to expose a covert Buddhist cult.

"Extreme Job," which had ruled the weekend box office chart since its Jan. 23 premiere, has finally been dethroned, surfing to second place with 478,277 admissions.

The sensational cop comedy surpassed 15 million in attendance over the weekend. It currently is the second-most viewed film of all time in South Korea.

The film was closely followed by "Innocent Witness" led by Jung Woo-sung and Kim Hyang-gi, which garnered 454,053 views.

In distant fourth was the U.S. animation "Cinderella and the Secret Prince" seen by 99,044 people. 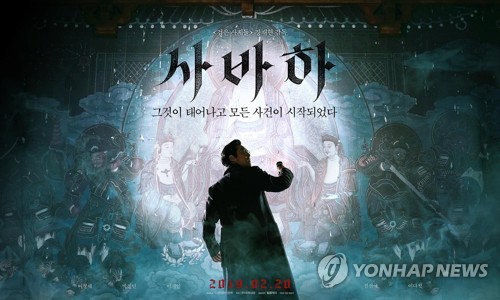