A bulletproof Mercedes S600 Pullman Guard carrying Kim arrived at the five-star Melia hotel in downtown Hanoi after a two-hour, 170-kilometer road trip from a train station near Vietnam's border with China. Kim reached the station earlier following a 66-hour train journey from Pyongyang, estimated to be a distance of 3,800 km.

Kim is scheduled to meet with Trump on Wednesday and Thursday for the first time in eight months. 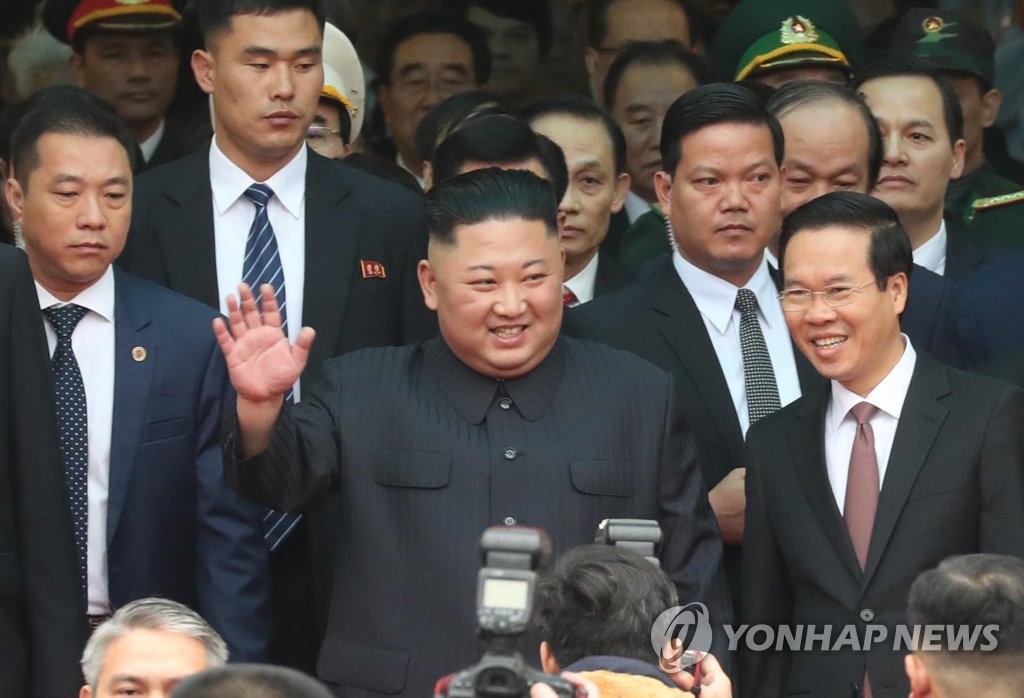 Security has been tightened to a maximum level around the hotel, with police and armored guards deployed close to it and a number of TV camera crews staked out.

Kim's schedule for the rest of the day was kept secret. He may visit the Ho Chi Minh Mausoleum, as his advance team looked around it. There's also a possibility of him meeting with Vietnamese leaders, such as President Nguyen Phu Trong.

Kim's armored, green-colored train, adorned with yellow stripes, made a stop at the Dong Dang station near the border with China around 8:10 a.m. He showed up in his trademark black Mao-style suit at the station, beamed a smile and waved to school kids waiting for him before being whisked away in the sedan. He became the first North Korean leader to visit Vietnam in 55 years since the trip by his grandfather Kim Il-sung, who founded the communist nation.

Kim will also pay an "official goodwill visit" to Vietnam to strengthen Pyongyang-Hanoi ties, which heralds his meetings with top Vietnamese leaders before or after talks with Trump.

He's apparently following the footsteps of his grandfather, who's known as his role model, by taking the train trip through China, observers said. 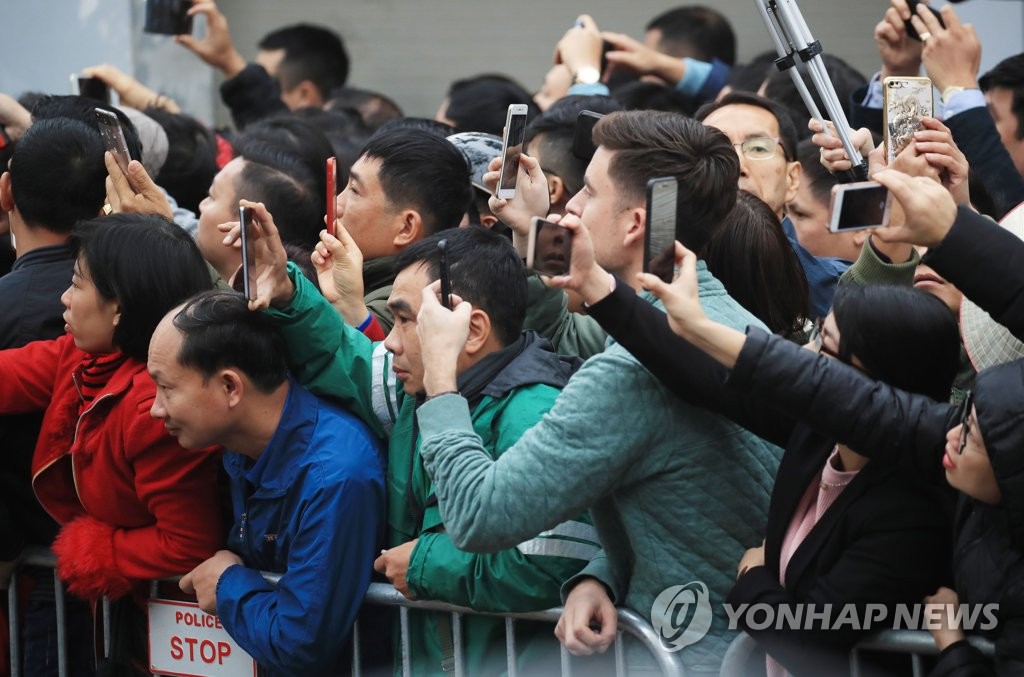 Trump is flying from Washington, D.C. and is due to land at Noi Bai International Airport in the Vietnamese capital Tuesday night.

Trump expressed optimism about his upcoming bargaining with Kim.

"Heading over to Vietnam for my meeting with Kim Jong Un. Looking forward to a very productive Summit!" he tweeted aboard Air Force One.

Before departing for Hanoi, he also said, "We want denuclearization, and I think he'll have a country that will set a lot of records for speed in terms of an economy."

The two leaders are scheduled to begin the summit with a one-on-one meeting and a social dinner, to be joined by their top aides, in Hanoi on Wednesday night. Secretary of State Mike Pompeo is already in Hanoi. The initial meeting is expected to set the tone for this week's event, another watershed not only in their personal chemistry but also in the nascent peace process.

Kim and Trump will have follow-up talks the next day in a bid to flesh out the details of their June 12 accord in Singapore, in which they agreed to work together for "complete denuclearization," transformation of Pyongyang-Washington relations and a peace regime.

There has been little substantive progress, however, in the process amid disputes over what denuclearization measures by the North and corresponding steps by the U.S. should be taken and their sequencing.

The summit location remains unannounced amid speculation that the Sofitel Legend Metropole hotel right next to the government guesthouse, where North Korea's advance team is staying, has been chosen. 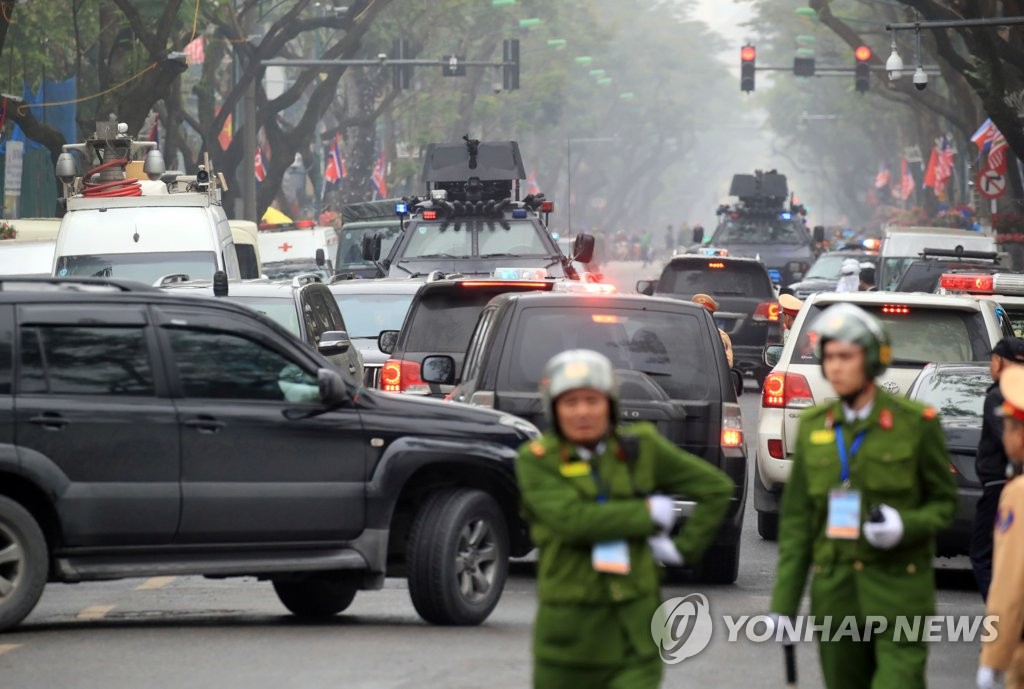 One summit focus will be whether they can produce a joint declaration calling for concrete steps toward denuclearization by North Korea and corresponding U.S. measures that satisfy Pyongyang.

The North's main Yongbyon nuclear complex is seen as a major card the North Korean leader could play in return for such incentives as the proclamation of a formal end to the 1950-53 Korean War and the continued suspension of major combined military exercises between the U.S. and South Korea.

Washington's priority is to freeze the North's weapons of mass destruction program and delivery means, according to U.S. officials. They also hope for verifiable dismantlement of the Yongbyon facilities and a clear denuclearization road map.

Posting liaison officers in each other's capital is also being considered. As he did in Singapore, Trump, a former businessman, is likely to dangle the carrot of a bright future for the impoverished nation if it ceases its nuclear weapons and missile programs.

Kim is expected to call on the U.S. to lower its guard and relax sanctions on Pyongyang.

The format in which they could announce their agreement, if they reach one, is also grabbing attention. Observers do not rule out the possibility of a joint press conference, a routine post-summit ceremony for Trump and other foreign leaders.

Multiple photos showed that Kim's special train with 21 carriages had a different locomotive when it arrived in Vietnam from that at the time of departure. The color and plate number were different.

The change is just attributable to a related rule for a foreign train to operate in China, a source said.

A Japanese TV station aired the footage of him taking a pre-dawn smoke break at a Chinese train station en route to Vietnam. In the video broadcast by TBS, Kim was also seen talking with North Korean officials, including what appeared to be his sister.

The U.S. had planned to set up a press room for White House correspondents at the Melia hotel but decided to relocate it to the International Media Center at the Cultural Friendship Palace, citing a "technical" issue.

Kim will likely stay there through Sunday, given the hotel's prior notice that its own security measures, including the X-ray scanning of visitors' belongings, will last until that day.