SEONGNAM, South Korea, Feb. 27 (Yonhap) -- South Korea's finance minister said Wednesday that the government will invest 2 trillion won (US$1.7 billion) in research and development in the bio-health sector in the latest attempt to secure a new growth engine for Asia's fourth-largest economy.

The investment will be funneled for development of new drugs and medical devices and equipment, as well as the establishment of big data platforms, according to the Ministry of Economy and Finance.

Hong Nam-ki, the minister of economy and finance, also said the government will provide support to bio-health venture firms to ensure the number of the so-called Rising Star companies, with annual sales of more than 30 billion won, reaches more than 150. 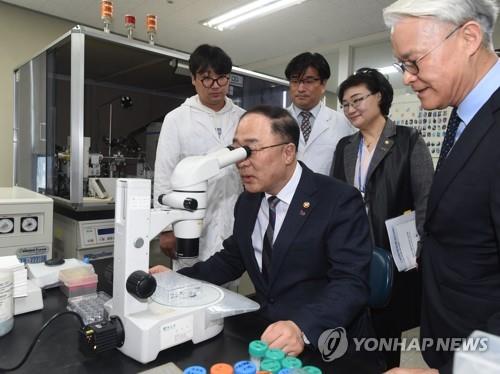 He made the comments during his visit to a complex of bio-health companies in Pangyo, just south of Seoul. Pangyo -- South Korea's answer to Silicon Valley in the U.S. -- is home to many technology companies, including NCsoft Corp., a leading game developer.

The visit is the latest in a series of meetings Hong has held with business executives to take into account their opinions in crafting policies.

Hong also vowed to drastically lift regulations that could hold back the launch of new bio-health products and services.

The government is set to announce a mid-term strategy in the bio-health sector in April.