SEOUL, Feb. 28 (Yonhap) -- The remains of 74 Korean victims of forced labor during Japan's colonial rule were returned home on Thursday.

An emotional homecoming ceremony was held after the remains arrived at Incheon International Airport, west of Seoul, from Osaka, Japan, with the attendance of their relatives and hundreds of citizens and public officials.

Earlier, the Korean Council for Reconciliation and Cooperation (KCRC), a coalition of around 200 South Korean civic groups, took over the remains in a ceremony held at a temple in Osaka on Wednesday. 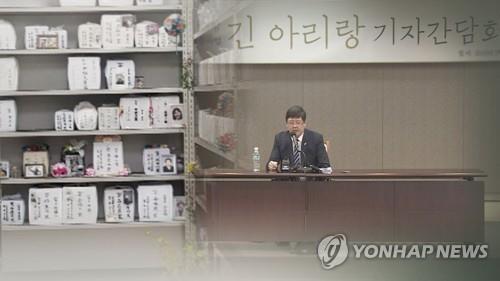 The 74 Koreans were forcibly mobilized by a general order proclaimed by the Japanese colonial government in 1938 and all of them died in Okayama, western Japan.

Seventy of them engaged in forced labor, with the remaining four serving as civilian workers in the military. Their remains have been kept at Osaka's Tokoku-ji Temple since 1974.

"We're sorry, sad, but happy on the other hand. We're deeply sorry to have kept them waiting for nearly eighty years," Kim Hong-geol, chairman of the KCRC, said at the reception ceremony in Osaka.

Following the airport ceremony, the remains will be moved to a plaza in front of the Korea Press Center in downtown Seoul for a roadside memorial rite.

Then a formal memorial service will be held for the 74 victims at the Kim Koo Museum & Library in central Seoul on Friday, which also marks the centennial anniversary of the March 1, 1919, independence movement against Japan's brutal colonial rule.

The remains will be temporarily laid at a temple on Jeju Island on Saturday.

Remains of 74 victims of forced labor returned from Japan

Remains of 74 victims of forced labor returned from Japan