HANOI, Feb. 28 (Yonhap) -- U.S. President Donald Trump said again Thursday that he is in "no rush" with North Korea as he headed into a second day of talks with North Korean leader Kim Jong-un in Hanoi.

"Speed is not that important. To me, I very much appreciate no testing of nuclear rockets and missiles," Trump said at the start of one-on-one talks, with Kim seated to his right.

The remark suggests a long road ahead to denuclearize the North. 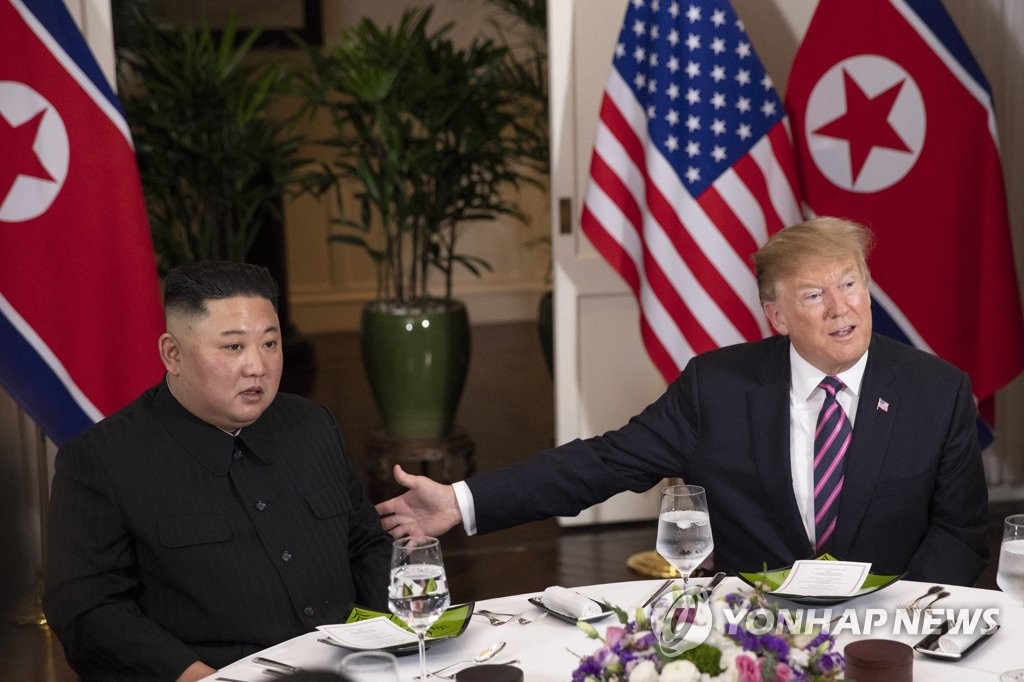 "Chairman Kim and I had a great talk about that last night. We had a very good talk about that. Again, I am in no rush. We don't want the testing. We've developed something very special with respect to that," he said.

The "no rush" remark, which Trump has made repeatedly in the run-up to their meeting, has fed speculation that the president is lowering expectations for the summit and possibly backing down from the U.S. goal of complete denuclearization of the regime.

"We had very good discussions last night. There were a lot of great ideas being thrown about. I think very importantly though, the relationship is very strong," he said.

Trump dangled the prospect of economic development for North Korea, something his administration has promised in return for denuclearization.

"When you have a good relationship, a lot of good things happen. So I can't speak necessarily for today, but I can say a little bit longer term and over a period of time, I know we're gonna have a fantastic success with respect to Chairman Kim and North Korea," Trump said. "They are going to have an economic powerhouse."

Vietnam, the host of Trump and Kim's second summit, has been praised by Trump as a model for North Korea to follow on its path to economic development.

"I believe that it will be something economically that will be almost hard to compete with for many countries. It has such potential," he said.

(LEAD) (US-NK summit) Trump says he is in no rush with N. Korea

(LEAD) (US-NK summit) Trump says he is in no rush with N. Korea