SEOUL/TOKYO, Feb. 28 (Yonhap) -- On the eve of the historic centennial of the March 1 Independence Movement, various events and ceremonies are to be held throughout the country on Thursday.

The main celebratory event will take place at the Independence Hall of Korea in Cheonan, about 100 km south of Seoul, in the evening under the sponsorship of the Ministry of Culture, Sports and Tourism.

The two-hour-and-a-half national festival, in celebration of the March 1 movement's centennial, will be broadcast live by KBS 2TV from 6 p.m., featuring collaborative performances by top Korean signers and displaying the Korean people's wish for world peace. 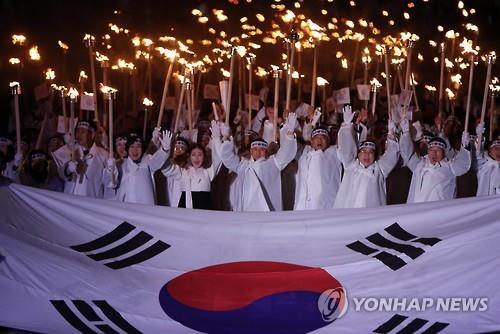 World-renowned soprano Sumi Jo is scheduled to release her special new song, "I'm a Korean," at the festival.

An annual reenactment of the March 1 Independence Movement will be held at Cheonan's birthplace of renowned female independence fighter Yu Gwan-sun and a nearby former marketplace named Aunae. Yu, then a 16-year-old student, played a pivotal role in leading a pro-independence rally at the Aunae market on April 1, 1919. In the marketplace rally, 1,300 people gathered to demand Korean independence.

Participants in the reenactment event will march about 1.4 km between Yu's birthplace and Aunae carrying a torch and shouting "Manse!", which means "Long live the independence of Korea!." 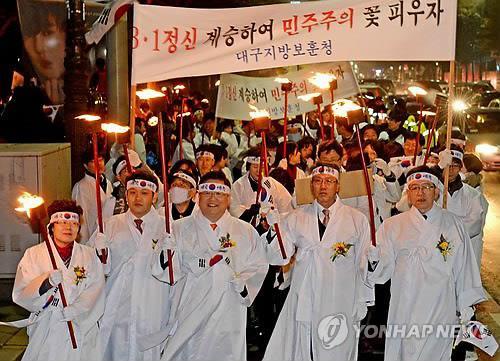 In Daegu, about 300 km southeast of Seoul, about 1,000 citizens will hold a March 1 centennial celebration event on the downtown street of Dongsungno.

The event will feature performances by a choir of citizens and singers, a lecture on the Manse movement in Daegu a century ago, and a reenactment of a street march of Manse demonstrators.

In Sejong, an administrative city in central South Korea, a musical will be performed at the city's lake park from 7:30 p.m. as part of its March 1 movement centennial celebrations.

In other parts of the nation, including Gwangju, adjacent South and North Jeolla areas, Gyeonggi Province and Chungcheong provinces, various reenactment events of the Manse march and academic forums will take place to reflect on the meaning of the March 1 Independence Movement.

The Ministry of the Interior and Safety released a video on YouTube introducing the meaning of the centennial of the March 1 movement and the Korean Provisional Government, which was launched in Shanghai, China, on April 11, 1919.

In Seoul, the municipal government covered the outer wall of Deoksu Palace with 630-meter-long white cloth to symbolize the funeral of Gojong, the last king of the Joseon Dynasty and the first Emperor of Korea who died mysteriously in January 1919.

Historians say the king's sudden death during confinement by colonial Japan proved a catalyst for the March 1 Independence Movement.

The March 1 Independence Movement began in Seoul on that day 100 years ago and spread throughout the country. More than 2 million Koreans participated in over 2,000 demonstrations to call for independence from Japan. Korea was a colony of Japan from 1910 to 1945.

The Seoul Metropolitan Government is planning to hold a massive street march in memory of the Manse movement, as well as a performance by a choir of 3,100 citizens on Friday.

Meanwhile, a group of South Korean and Japanese civic activists plans to hold a joint ceremony marking the centennial of the March 1 movement in the heart of Tokyo on Friday, its organizers said.

The Tokyo ceremony will kick off at a plaza in front of Shinjuku Station at 6:30 p.m., featuring a candlelight vigil and Japanese speakers' comments on the colonial rule of the Korean Peninsula and discrimination against Koreans residing in Japan.

Separately, the Women's Active Museum on War and Peace will open a special exhibition on Korean women forced into sexual slavery during World War II at the Avaco Building in Tokyo's Shinjuku district on the day.